In a two week period of September of 2005, temperatures were in the 90's and the humidity was about 30%. Individual leaves, or leaf clusters, of similar size, of various plant species, were tested for ignition times until two numbers were  within a few seconds. If after five tries, numbers were still divergent, numbers were either listed as a range or averaged if all over the place. Most plants tested were field grown and had not been watered all summer (exceptions noted in table below). Every effort was made to duplicate  a very dry coastal garden under water rationing.

Garden watered plants should be considerably harder to ignite if watered as little as fifteen minutes once every two weeks, BUT, not always. However, the worst fires I've seen are at the end of a drought cycle when there is no water to even fight the fire, never mind water the plants.


Field tests of experimental crown fires revealed that wooden walls can successfully survive intense flame fronts from as close as approximately  30 feet  away.
Most structures are lost because of firebrands, (debris on fire that is falling from the sky). (Cohen, 1995)

If you live in town and have a twenty foot front yard, ignore this list. This is primarily for those of you in rural residential areas, at the worst with a poor well, thirty minutes from the nearest fire engine and are gone a lot. The designers that are planning an urban interface should find this useful also.

Using a propane torch with a one centimeter length flame (+/- 1mm), the blue tip of flame was placed on to a leaf, if leaves large, or first leaf cluster if leaves small, until the leaves ignited and held a flame longer than five seconds. Some leaves would flash. If they held a flame or carried to other leaves that was counted. Some blacked and never ignited, some never even glowed, and others ignited easily. At first the tests were done on the plants themselves, but that proved too exciting and the slightest breeze altered the results (and had potential for even more excitement). I settled on collecting a few stems of a few plants and testing those in a closed barn within minutes of collection. Results were not what I'd had heard or read, and often not what I expected. Generally, (and boy are there inconsistencies,) the more drought tolerant the plant, the poorer it burns, the smaller the leaf, the poorer it burns, and the wider spaced leaves are very hard to ignite. For the most part, unwatered natives did better than watered non-natives.
Good mulch is an important component of California's gardens/landscapes and ecology. The moisture that mulch retains helps keep the plant material hydrated and a little less flammable. Mulch (shredded redwood bark or shredded cedar bark) does burn, and creeps along with a smoldering fire that can be kicked or raked out. This type of mulch burns with a lot of smoke,and  little flame. A pile of dead leaves, twigs and sticks does not burn in the same way. Think of the comparison of a newspaper laid flat on the ground versus each page wadded up into a pile. The worst situation is when you have flashy fuels like dead grass running up into either taller weeds, dead leaves of garden plants or some of the native plants.

This experiment really points out that weed control and garden hygiene are as important, or more important, than plant choice or irrigation practices. 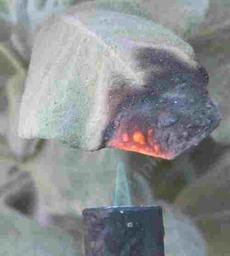 Flame applied to leaf. Notice it is not bursting into flame.

Many of the leaves never even glowed.

If after sixty seconds the plant didn't light, that's amazing. Bushes that burnt after 15-30 seconds are about as flammable as your home.
Some of the Ceanothus should be considered heat shields.

The numbers explain why brush fires slowly spread in comparison to grass/weed fires. Grass/weed fires can kill you. Look at it this way (and there are no absolutes in nature): when a field is in annual grass and mustard, and the ignition time per plant is almost instantaneous, you'll get what appears to be area ignition.  On the Las Pilitas fire we had an area by Santa Margarita Lake where the fire moved through miles of grass in a few minutes. You can't outrun something that basically blows up.
Brush burns at, on average, 45 seconds per plant and makes a very hot creeping fire,(with some dramatic flashes); you can't be within one hundred feet of it and be comfortable, but you can usually move to one side or the other.  Houses can tolerate a great deal more heat than humans and can be undamaged  in spectacular fires.
In contrast, if you have weeds in brush, you get a very fast, erratic, spotty, and hot fire.
In fire training one of the points they drilled into the concrete of our heads was,  "firemen rarely die in brush fires...all the recent deaths in California have been in grass fires".Back in the 1980's during the Chispa fire we (volunteer and paid firefighters) were back-firing into the main fire to stop it. We could not light the brush; the torch made a fire ball in the brush, and it would go out and not stay lit. After about thirty minutes of this frustration (hey, we were exhausted and a little slow) we figured out that if we looked for weeds (mostly annual grasses), we could light them and they would light the brush. That worked! 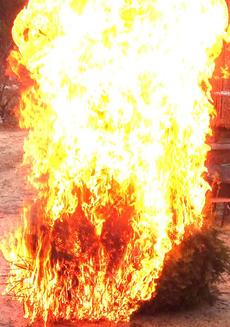 In conclusion,  you want to work towards a  weed-free landscape, with no leaves on the roof, no flammable wood furniture or lath type structures near the house, and no wood shingles or any other flammable item within thirty feet of the house.  Picture a hot day with 20 mph winds and a helicopter flying over your home throwing out buckets of lit matches. Hygiene is the most important thing to remember.
Really stupid things cause  most problems in a fire situation; that corner of the yard that you never weeded, where you left the old cardboard box and tree trimmings, the rattan furniture under the bamboo overhang,  and the rabbit that was on fire and ran under your lath- covered deck.
Choice of plant material matters;  native plants are generally less flammable than non-native plants. For many species, watering makes no difference. Mulch is ok as long as it doesn't run right up to within about a foot of the house.  The trade off is the mulch can smolder and cause some heart burn, but the plants will have better moisture retention and be less likely to burn.
A fire landscape should contain only enough plants to stabilize the site.  Be very limited in plant material; rocks and concrete do not usually burn.  Decomposed granite walkways are a wonderful addition to a native plant garden.
Plan on not having any water during a fire, even for months leading to a fire. It's common for the power to go out in fire areas along with water pumps and for the fires to occur during water rationing.  In urban interface areas it's also common for all the people a mile ahead  of the fire to water their houses down and the water not to be available to homes nearest the fire. On one fire we pulled the engine up to a hydrant on one of the higher streets, hooked up the hose, turned on the hydrant to listen to a sucking sound as our hose went flat.
Cohen, Jack. Structure Ignition Assessment Model (SIAM),  USDA Forest Service Gen. Tech. Rep. PSW-GTR-158. 1995.