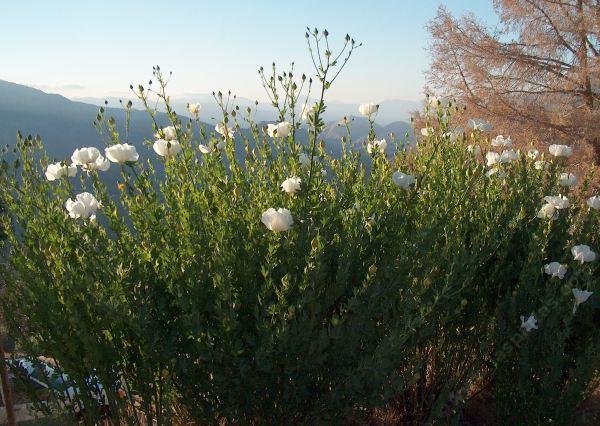 Matilija Poppy, Romneya coulteri,  is a perennial/shrub to eight feet tall and if in a light soil forever wide(It spreads by rhizomes). The large paper-mache flowers are white with a yellow center.

Romneya likes sun and good drainage. In heavy soils it can be difficult to establish. You will lose none in sand near the coast, but 2 of 3 in interior adobe will die. (We'll usually plant 3 to get one in heavy soils.) They do grow in red clay that is almost waterlogged in winter, dry as Death Valley in summer. In sandy soils they can grow under your house and come out the other side, under driveways, or consume your entire yard. This plant is not for condos or small yards.

Water well when planted, then once per week or so though first summer. They should kick by the next spring, when they do, stop watering. Kick?=grow to six feet or so, start spreading and flower. No amending, no fertilizer tabs, doesn't even care about mulch. Of course in cool climates you can get away with all sorts of things.... "You may be interested to know that I bought one of these plants locally some years ago and despite the fact that my area,(Cheshire, England) could not be more different from California, it appears to be thriving. We have lots of wet weather, cold winds and overcast skies and the area is noted for its rich agricultural land, its roses and its turf!"

Matilija poppies commonly go deciduous in summer or fall and come back in spring. If you buy one in it's deciduous stage, it will look dead to an average gardener in Seattle. Nope, it's just deadest stickus, normal mode for fall.