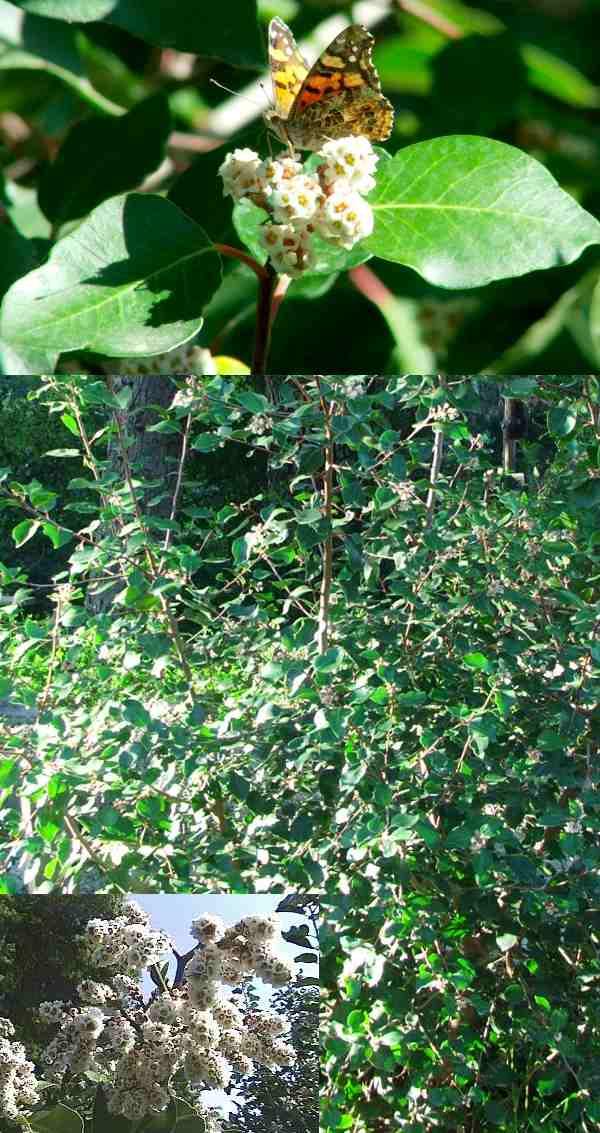 play movie
Rhus ovata, Sugar Bush is an eight foot evergreen shrub that can grow to twelve feet. This native of Southern California and Arizona has large white flower clusters in March-May, large leathery leaves and reddish berries used to make lemonade-like drink. Native to dry slopes away from the coast, Santa Barbara County(just south of Buellton) south into Baja. Sugar bush likes sun and little or no water after established. In some areas Sugar bush is growing in very soft chaparral (that is being replaced by Avocados), in other areas like east of Hemet and around Perris a few Sugar Bushes are all that are left amongst the bare ground and occasional weed. You can use as a screen, hedge or specimen. The plant needs little tidying to look tidy. In areas that are fire prone, water once a month in the summer between plants or wash the foliage off with 15 minutes of sprinklering once every week or two and make sure there are NO weeds near the plants. Sugar bush will still burn but only after everything else has, literally. Some of the post fire pictures have been interesting to appraise, house gone, conventional landscape gone, native oak tree and sugar bush 30 to 50 foot away still there, all be it a little sunburnt by the house. Fire planting of natives is kinda like personal hygiene, you need to take a shower occasionally(irrigate), wash your clothes occasionally(trim dead leaves), wash the dishes(kill the weeds) and haul out the trash(remove debris), occasionally. The first year plants are hardy to about 25 F., after a couple of years they're hardy to 10 deg or less. I think this plant can tolerate -10. It tolerated 0 here. We had a customer in the nursery many years ago that told me that "nothing would grow in her area". "It hadn't rained in 3 years". I pointed out that there was probably something growing native there. It looked as if a light turned on in her head, as she turned and looked at our Sugar Bush. "But how can they grow?" This is one of those plants that is very drought tolerant. We haven't watered our mother plants in 20 years or more. The year of our 4" rainfall this was the best looking plant on the place. Since Sugar bush is usually a little slow out of the ground, we'll inter-plant with Ceanothus, Coffeeberry or even Salvias to get quick fill when a screen or hedge is needed. The fillers will be crowded out, and unless you're in a bad fire area, you'll not need to lift a finger. In a fire area remove the old plants as they get less than spiffy.
Sugar Bush has done well in many locations, including Lemoore, Taft, Bakersfield, Los Angeles, San Luis Obispo, and others.