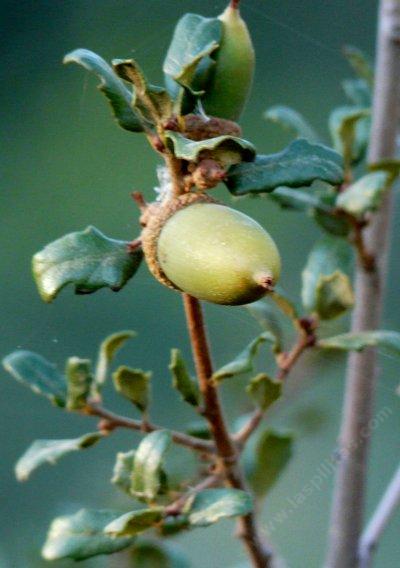 (Q.dumosa )A this 'species' has caused a very difficult problem for us. We have grown Quercus dumosa for years. It is as described here. About 1990 a less than clever person decided that there was a new' species in San Diego and Orange County. The problem with this is they named the new' species the old species and gave the old species the new species name. Moreover the new' species hybridizes with Q. durata, Q. engelmannii, Q. Garryana, Q. john-tuckeri, Q. lobata and the old' species Q. dumosa. Moreover it doesn't key out worth a damn as half the Q. dumosa in this area(San Luis Obispo County) key out to Q.berberifolia' and half to Q. dumosa. The new' Quercus dumosa' is not supposed to be within 300 miles. In the same stand the bushes move from holly like and small, with small acorns to tree like and large acorns, with large acorns on small bushes with smooth caps, to large trees with small acorns with tubercled cups. On our Nelson way Nursery site we also have a spectrum that can not be separated by the key. McMinn said it plainly in 1939, (An Illustrated Manual of California Shrubs',) "It is the most variable of our shrubby oaks in foliage and fruit characters. Leaves with entire, irregularly toothed, and nearly regularly toothed margins occur throughout the range of the species and often on the same plant.... Several varieties of this species have been described, but the characters used in attempting th distinguish them fail when specimens collected throughout the range of this polymorphic species are examined. An evergreen shrub or small tree." The species' should both be Quercus dumosa, types, varieties, maybe even species could be described, but I have trouble even with that, Quercus dumosa is just too variable. If the same standards were applied to oaks in California as many of the other genera(Mimulus and Eschscholzia come to mind) there would only be a few species' in California with many varieties described. If you do not grow a site specific grow for this form of oak, I have know idea what you'll get. Native to most of Calif.. A good tree for parking strips or other similar areas. This tree matures out at 10-20 ft.. It grows at about 1-2' per year. It is native on the nursery site on the north side of the mountain. It is mixed in with Keckiella cordifolia, Lepechina calycina, Trichostema and Dendromecon rigida. Easy to grow and drought tolerant. Plant it so it doesn't have to be big fast. Use Ceanothus 'Ray Hartman', Snowflurry', etc. as a large filler to cover this oak and to make a tree in the spot until the oak looks like a tree. This oak and the leather oak are similar but this one is a little bigger and its leaves are wavy instead of rolled. The leaves are dark green on top and dull on the underside. They are also very prickly. Oaks.