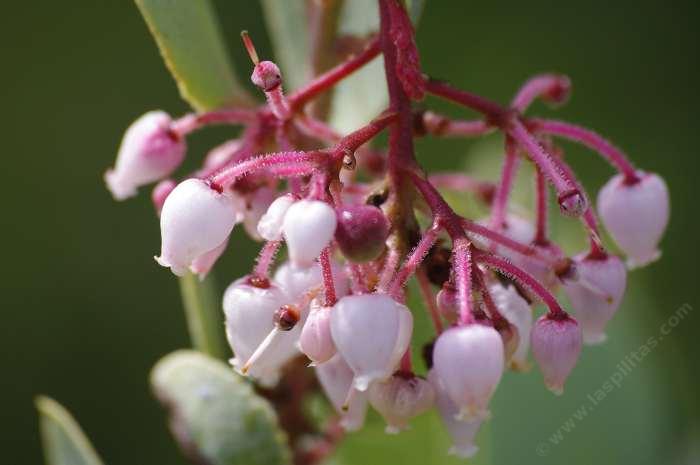 play movie
Mariposa Manzanita is native to the lower margins of the Sierra chaparral community. (see also A. glauca, A. viscida and A. manzanita.) The red trunks and gray foliage are dramatic. This manzanita, like most manzanitas, tolerates summer water the first  year only, then one summer watering will usually kill it.  In coastal areas it will do fine as long as you do not water past the 3rd year during the summer-fall period. In the area of the foothills of the central Sierra Nevada this is one of the common chaparral components. The gray foliage and red bark make a showy planting amongst boulders with a mulch layer. It is excellent combined with oaks or pines. Associated plants range from Pinus sabiniana, Fraxinus dipetala, Rhamnus ilicifolia, Rhus trilobata, Quercus wislizenii, Cercocarpus betuloides, Ceanothus cuneatus, Quercus douglasii to Pinus ponderosa with Libocedrus (Calocedrus) decurrens .
Mariposa manzanita is an amazing insect plant. When it is in flower all sorts of weird bees, flies and butterflies show up and party. No they do not seek you out to bite you. They are only interested in the large pink flowers and only see you as a large threat, like we would see a bull or bear. Which is how we seem to act.
Arctostaphylos viscida is very similar to A. mariposa. Ironically, A. mariposa is the more hairy and glandular. A. viscida is generally the less drought tolerant than A. mariposa and generally occurs at 3000-5000 ft. Arctostaphylos mariposa is now considered a subspecies of Arctostaphylos viscida and its correct name is Arctostaphylos viscida ssp. mariposa.