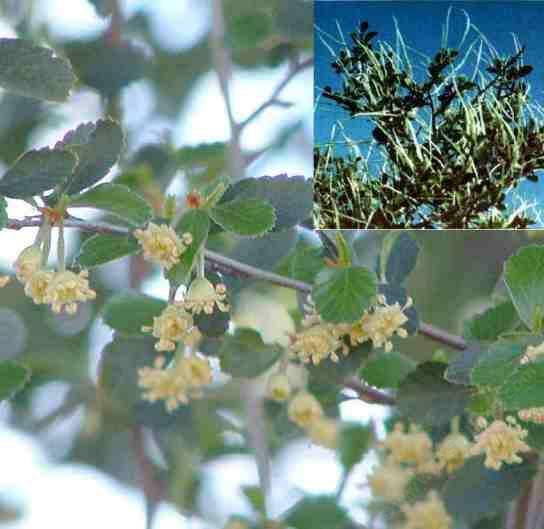 play movie
Mountain Mahogany is an evergreen shrub, found in Oregon, California, and east to the Rocky Mountains. The whole plant appears silvery in the late summer through fall, due to the feathery fruits. The plant has much smaller and hairier leaves than C. alnifolius, a graceful shape and open structure, so it looks more "native", while C. alnifolius looks more like a typical garden plant. With a little training you can make a 15 foot hedge out of these. Cercocarpus betuloides tolerates full sun, is drought tolerant within its range, and tolerates clay soils and wind. A red dye can be obtained from the bark and roots. We observed no cold damage at -20 degrees F. (but it will become deciduous). Deer do utilize this species as a browse plant. Native on the nursery site on north slopes in clay or granitic soils. All the Cercocarpus species are nitrogen fixing (Pinyuh) and good for revegetation, erosion control and wildlife. Stick on the hillside in amongst the Ceanothus and manzanita to create a different texture. Did I just type that?