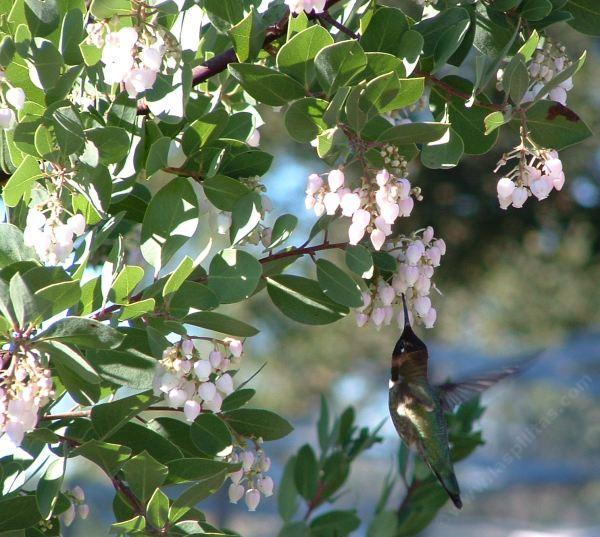 play movie
'Mama Bear' manzanita seems to be beautiful, very stable, very blossomy, has a nice form, sprouts back after damage (did I mention I drove the delivery truck over it), has wonderful pinkish white flowers the hummingbirds and bumblebees like, looks good in containers and seems to superior to 'Dr. Hurd'  manzanita for most yards(it's smaller and has cleaner foliage). The purple trunk and gray-green foliage make the six to eight foot tall by four to five feet wide manzanita a standout. 'Mama Bear' is a hybrid manzanita between Arctostaphylos stanfordiana bakeri 'Louis Edmunds'(now Arctostaphylos bakeri ssp. bakeri) and Arctostaphylos densiflora 'Sentinel'. In the wild Arctostaphylos densiflora forms miles of hybrids with A. stanfordiana and A. manzanita. We had some 5 gallon 'Louis Edmunds' and 'Sentinel' in a small area that we covered with one small green house and two shade houses after a couple of years. The five gallons were long gone, but a few seedlings popped up. Since there really are not enough people here, things have a tendency to get ignored unless they burn up, blow up, or block a driveway. The greenhouse was abandoned and imploded. Under the old poly was this beautiful manzanita! The greenhouses were named the three bears. The 'Little Bear' or 'Baby Bear' had the seedling growing up through it, like a phoenix. The small leafed manzanita that we selected was called 'Baby Bear', the large leafed form was 'Mama Bear'. The baby grew to be bigger than the mama. 'Mama Bear' Manzanita is a selection by Bert Wilson founder of Las Pilitas nursery. Click here for more about California Manzanitas(Arctostaphylos).


"Mama and Baby Bear manzanita were named after three shade houses that once stood on the Santa Margarita nursery site. The smallest house was baby bear, where both these seedlings came up. Then mama and Papa bear shade houses. My dad loved to make up ridiculous names for the greenhouse so we were all forced to say them out loud to his great enjoyment. Some were named after scientist. Einstein, Clemence. Some where named after his heros, Larry, Moe, Curly, Abbot and Costello. Some were just fun to say, Eha, haha, baja. We had to get rid of HAHA as this combo caused mass confusion and tuned out to not be so haha after all.. These seedlings just came up amongst the stock in the small structure called baby bear. My dad thought they were so neat looking he just took the structure down and let them go. Mama bear has larger leaves and flower. It also has whiter flowers. Baby bear has much darker pink flowers but they are smaller, and smaller gray tinged leaves. The parentage is probably A. desiflora, A. manzanita and or A. Louis Edmunds, which greatly reassembles baby bear in coloration. Mama bear more resembles A. manzanita. "