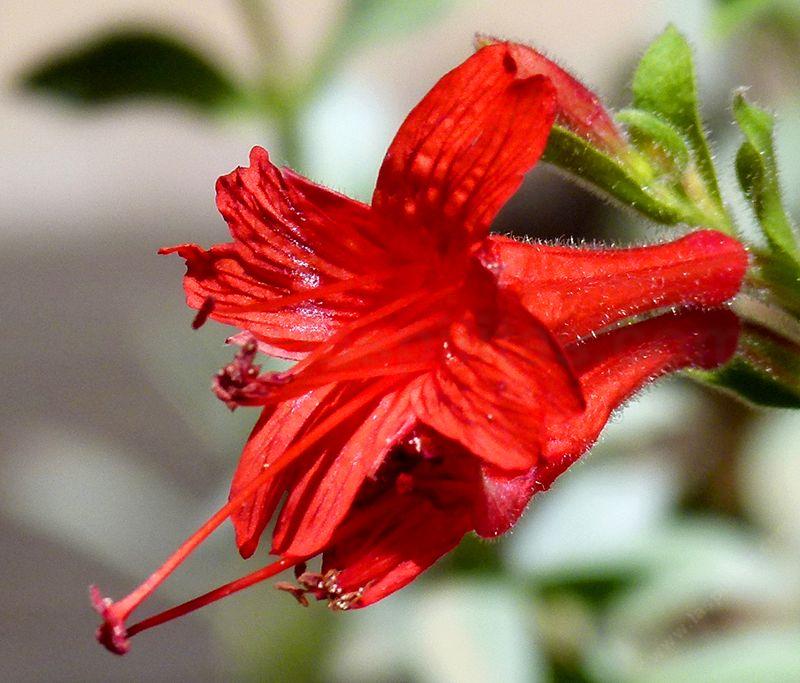 play movie
Mattole River California Fuchsia is a three-six inch tall perennial with grey-white foliage forming a clump 2-3 foot across. This California fuchsia likes full sun near the coast and afternoon shade inland. It is native in a 35+inch rainfall area, drought tolerant along the coast but inland you will need to bring the rainfall up to 30 inch with extra water. Looks really good along the edge of a lawn. In coastal gardens it has flowered with fuchsia flowers all summer and into fall. In interior gardens it has flowered for a month or two. The contrast of grey against the orange-red of the flowers is startling and show stopper for both humans and hummingbirds. The only problem we've had with this fuchsia is the deer. They like the flowers as much as the hummingbirds, but they do not pollinate the flowers. One of the landscape contractors planted a small slope of this California fuchsia in San Luis Obispo and had many raves about it, without the customers knowing what it was. Just that orange mass along ... street, do you have something like that?". Mix with Erigeron 'Wayne Roderick' and Penstemon 'Margarita BOP' if you want a colorful edging that flowers most of the year. (Syn. Epilobium septentrionale, Epilobium canum ssp. septentrionale, Epilobium 'Select Mattole' )