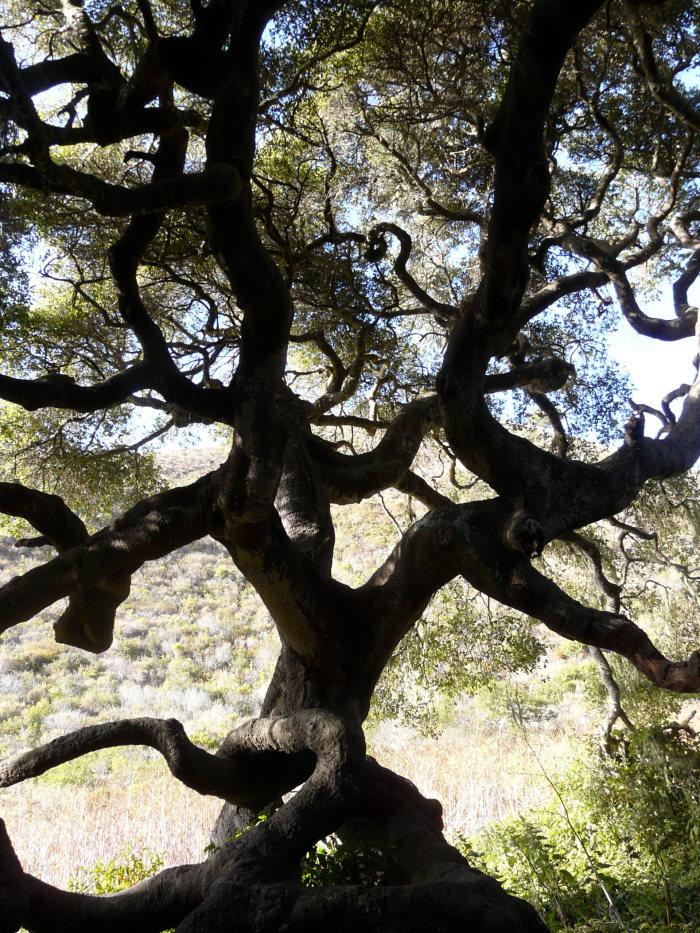 play movie
This California oak tree has dark green holly-like leaves and is native to the coast ranges of California. This, like most of the other oaks is a climax species and needs a little protection and loving care for the first few years of life. Now that means you need to put some decent mulch around each tree and give the tree a watering with hose or sprinkler every week or two for the first couple of summers, OR, plant the little oak trees under a cover plant like shrub coyote bush (Baccharis pilularis), buckwheat(Eriogonum fasciculatum), Artemisia californica, toyon (Heteromeles arbutifolia) or coffeeberry (Rhamnus californica). Often the planting under the right bush results in more and better growth than planting little (dead) soldiers in a row. NO fertilizers, amendments or tubes folks, it is much more important for native oaks to find the right spot to plant them and then totally control the weeds.
Now weed control is not weed eating(thats what cows do), it means total control with herbicides. Now I know some of you do not want to control the weeds this way, and if you have one tree and a small yard in downtown Los Angeles, you can hand pull(and patch the pull with gorilla hair mulch), but for most of you herbicides are much better for the plants and wildlife. Weed pulling favors the weeds, messes with the roots of the oaks, and probably kills as many critters as the sprays do. Weedeating is like scraping the scab off of a wound, the scab(native leaf litter) is gone, but the wound is still there. Use the herbicides intelligently and read and follow the directions! Coast Live Oak is a picturesque tree and is an outstanding bird plant.
Coast Live Oak is a food plant for the beautiful California Sister butterfly. We had at least four families of Bullock's Orioles with their flashy orange & black feathers make their nests in these oaks. This is the backbone of a garden or plant community as everything else seems to live off of it, or under it. Where it grows the whole microclimate changes. Plant in 'groves' or with Arctostaphylos, Pinus, or Ceanothus. Other good companion plants for Quercus agrifolia, to name a few, are Salvia mellifera, Trichostema lanatum, Keckiella cordifolia, and Eriogonum fasciculatum. We lost some Coast Live Oaks in the ground in the freeze of 1990. They seem to be hardy to about -4. Their structure will handle only about 6 inches of snow at a time without major damage. (They have a rather closed limb structure that allows the snow to build up.) Coast live oak will go deciduous if it is under extreme drought stress. A lot of the trees in the interior of Arroyo Grande defoliated during our drought from 83-90. Most came back fine. I would have no problems in many climates with this tree. The interior form of this is native on the nursery site. They are somewhere around 275 years old. (I had some of the drought stressed limbs trimmed a few years ago and counted rings. I lost count at 200+.)
Now the Sudden Oak Death problem. This disease is similar to smallpox in humans, except some of the trees seem to be immune. It only seems to occur in cool coastal (summer fog) areasof Northern California and Oregon. We know that as little as 5% weeds or nitrogen pollution from cars can alter the immune system in an entire forest. Most of the oaks will not tolerate excess watering or fertilizer. Some of the locations of SOD are close to parks and trails. Other areas seem to be a little too consistent with pot growing areas. If you live in an area where SOD occurs, be very aggressive with your weed control, limit as many human inputs as possible near the tree. Plant native plants that live with the tree in nature. Particularly plant plants that historically were native in your area under oak trees. Spring water your new plants only, no summer water.
DO NOT WATER MATURE OAKS!
Oaks. What to plant under Oaks.