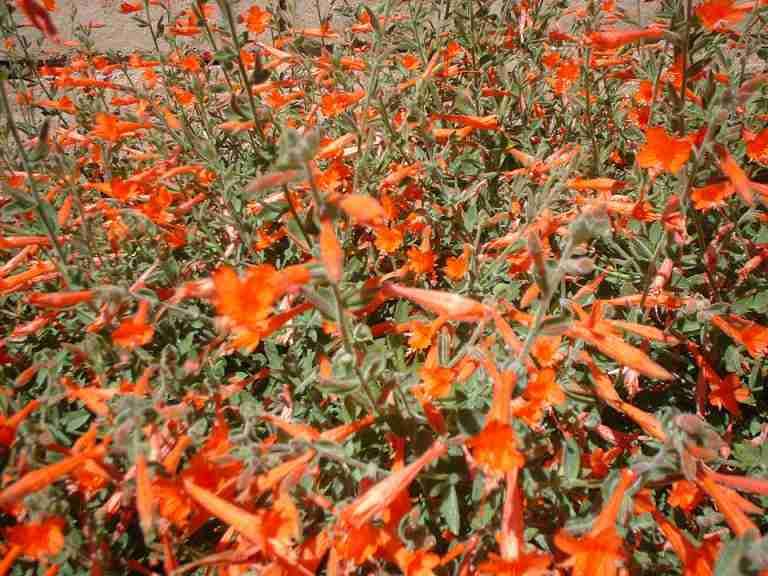 play movie
This California fuchsia is a low growing perennial that is useful if you need a ground cover in an area that gets 10-40" rainfall. After the first summer this fuchsia flowering plant can make it on its own. We usually plant the straight species of California fuchsia in a block so we can mow it down at Christmas. That is the maintenance on all the Zauschneria but is critical on mexicana. If you do not prune it, it can look bad after a few of years. If you mow it, it will stay 3-6" high spread to 3-6' across and have hundreds of hot red flowers on it in late summer. This California fuchsia is native on the nursery site. We sell straight species of California fuchsia primarily for revegetation as it has largely been replaced by the other named forms in landscaping. If you are into hummingbird gardening and you have a large garden this fuchsia is almost a one to one with hummingbirds. Taking hummingbird pictures I discovered they only nectar sip the flowers of this California fuchsia about once every 15 minutes for about 1-2 minutes. This native must have a very good, high quality nectar. Maybe we should market it as Hummingbird Fuchsia? If you order it in late fall or winter it may be deciduous, or even look dead, it's fine. Like an apple tree, do not expect flowers and fruit in January. Maybe one day I'll wander in to a box store and give the manager trouble for selling bare root fruit trees with no leaves, just to let someone else deal with an impossible quest, keeping the customer happy, when it's impossible. AKA Epilobium canum mexicanum, More California Fuchsia, Zauschneria or Epilobium