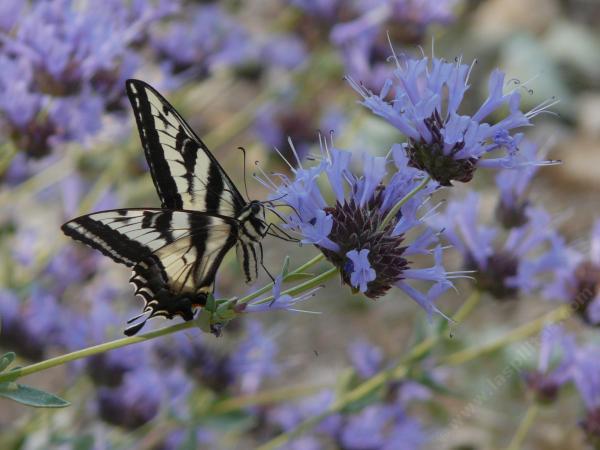 A form of Salvia clevelandii that was found near the town of Alpine in San Diego County, and was introduced by Bert Wilson at Las Pilitas Nursery. The form attracted attention originally because it was growing with full south-facing exposure on exposed rock and looked nice. Companion plants are Trichostema parishii, and Yucca whipplei. In the ground in the nursery it has proven to be hardy to below 10F, tolerant of clay or sand, healthy in a nursery can(no slight feat for a Salvia clevelandii), tolerant of mulch, and have a decent flower that produces a good show. In other words, it didn't die when we planted it out and forgot to water it, and the Alpine form of Cleveland Sage reminded us of our neglect by putting on its own private flower show.

This is one of the longest flowering sages we grow. Some years this Cleveland sage is in flower from May until December.

Although we've seen other butterflies on the Salvia clevelandii Alpine, the most photogenic is the Pale swallowtail Butterflies, Papilio eurymedon.

"I wanted to give you some info on some of the salvias I grow here in Portland OR. We just had a pretty good freeze up here and a very early one. I have Salvia mellifera, sonomensis, spathecea, clevelandii 'alpine' and 'whirley blue', salvia 'pozo blue' in the ground here. The freeze we had was about 3 days with a low of 18 and a high of 30 degrees over bare ground. I had most of these plants mulched around the crown with bark chips. All of the sages listed froze back to the mulch layer with one surprising exception. The 2 Salvia clevelandii 'alpine' I have took little to no damage. Even the 'pozo blue' that was reported to be so hardy put up little fight. I am aware that some of these will resprout, but I wanted to relay this to you so you can pass it on. I think our climate and soil is just not conducive to growing these CA salvias, with at least the one exception of 'alpine', or at least that is what happened in my yard. Keep in mind too that I grow California manzanita, Ceanothus and tons of Mediterraneans here so I had expected these Salvias to do better. I also noted the wholly blue curls survived and looks good!" James

Here's a native sage page where you can see all the sages of California.