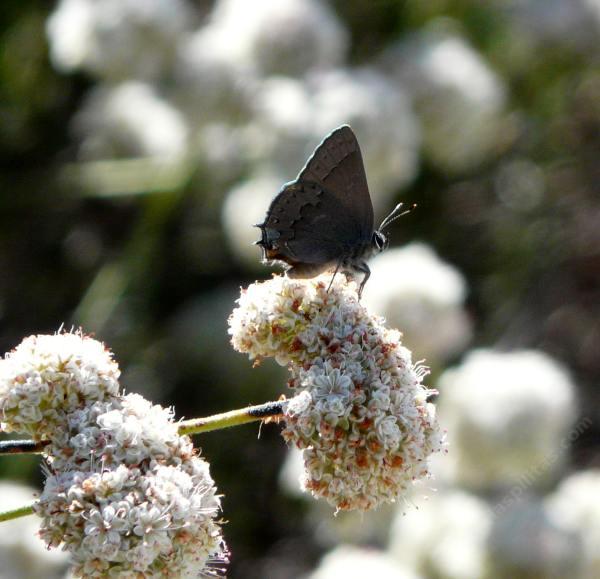 This variety of California Buckwheat is the common one that grows in most of the populated areas of California and is hardy to 0 F(but a sustained freeze of days can kill it) and very drought tolerant. We've had customers remove rose bushes to plant this one as it has more flowers for longer with less care and watering.

Eriogonum fasciculatum var. foliolosum, California Buckwheat,  has flowers, leaves and seeds that are all used by butterflies and small birds. White flowers come on in late spring, gradually turn pink in summer, then rust colored in fall. The rusty flowers commonly stay on until the next spring. Cool.

Plants occurring nearby are Penstemon centranthifolius, Salvia mellifera, and Trichostema lanatum, in full sun, in open areas, in sandy soil in central oak woodland, with Quercus agrifolia on the sidelines. Grows best in full sun but tolerates part-day sun, then is just a bit more elongated here. If only one native plant you would try, this would be the one!

The buckwheats are very important butterfly plants and one of the pillars of their communities. California Buckwheat has a whole community of insects living with the flowers. When I was photographing some of the native bees on the flowers I discovered layers of predators. There was the native bees, the flower flies and wasps, then predators of the flower insects, then insect predators of the predators, and then a bird would show up and eat the predator of the predator, and then a butterfly would fly into the middle of the fray. In a small garden you can set a couple feet away from this shrub (or sub-shrub) and watch 50 or maybe 100 insects interact at one time. It kind of feels like playing Q in Star Trek.