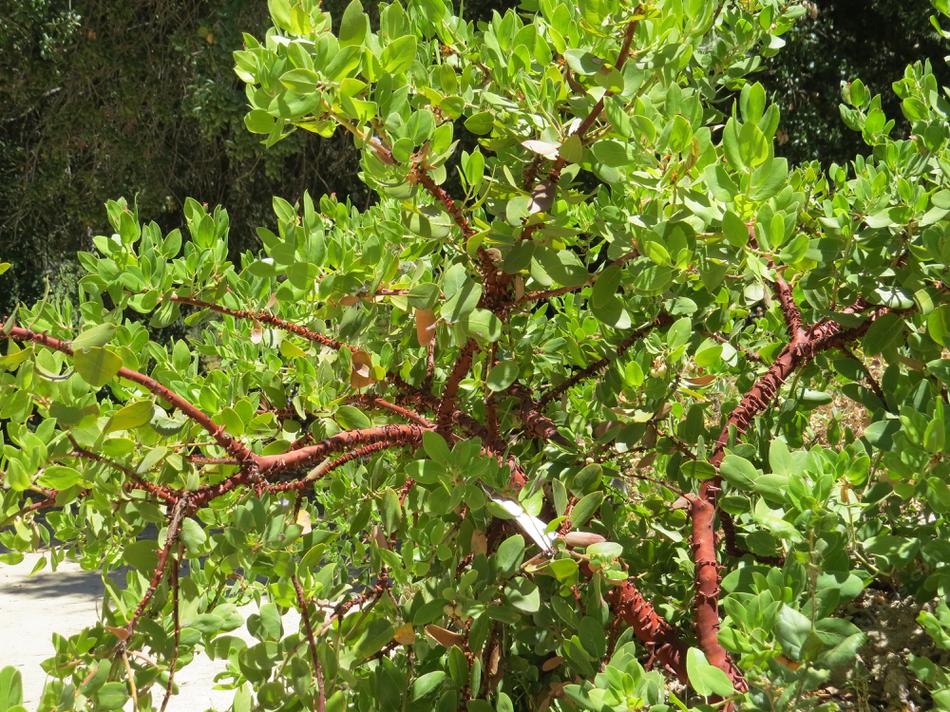 This little Manzanita selection, Harris Grade, was found  by the late Bert Wilson founder of Las Pilitas Nursery. Bert introduced it originally as  A. glandulosa Eastw. subsp. howellii  but then decided this name was suspect and updated it to Arctostaphylos crustacea subsp. eastwoodiana.  Harris Grade is a very refined manzanita with glossy green foliage,  and smooth burgundy trunks.  As a groundcover, it is low, 2 1/2 to 3 feet high (in the interior central coast ranges) and compact, spreading to around 4 feet wide, very good for a small garden, or massed, on a larger estate.

This plant is amazing. Harris Grade or Eastwood's brittle-leaf manzanita is outstanding, outperforming many other coastal hills manzanitas, in the interior coast ranges, where the summers are long and hot, with nary a drop of fog or rain for months on end. Throughout 15 plus seasons, this manzanita has remained low, and green and beautiful.

Native in the Lompoc hills where the Bishop Pine and California Huckleberry compete for the eye of an artist in a beautiful mountain scene.

Mix with other ground cover types like Arctostaphylos refugioensis or viridissima for a woodsy garden. Throw in some Ceanothus 'Skylark' for more flowers and contrast and maybe a background of Arctostaphylos pechoensis, 'Louis Edmunds' or 'Austin Griffiths' for even a more refined prehistoric look.

The taxonomy of the subspecies is best described as muddled. Jepson Manual lumps it with Arctostaphylos glandulosa. Smith in "A flora of the Santa Barbara Region" calls it Arctostaphylos tomentosa subsp. eastwoodiana. Many of the other keys do not recognize it. But the bush is very distinct in the wild, and when grown next to the other forms. While I do not think it is a species, it needs to be distinguished from other forms of Arctostaphylos glandulosa, or is it tometosa, or crustecea? It is possible it is a stable and naturally occurring hybrid of glandulosa and crustacea. This is the glabrate form of Arctostaphylos glandulosa var. howellii, as described by McMinn, in "An Illustrated Manual of California Shrubs." We've been struggling with the taxomony of the plant for years. It is different from most of the other manzanitas, Keeley, Vasey and Parker also struggled with it: "Also in 1933, Eastwood named A. howellii Eastw., a Monterey Co. pubescent taxon much like A. cushingiana but with glandular rachises. McMinn (1939) added that it had glandular fruits. This taxon was recombined as A. glandulosa Eastw. var. howellii Adams ex McMinn (McMinn 1939) and later A. glandulosa Eastw. subsp. howellii (Wells 1968). Hoover (1970) suggested this taxon was ‘‘an apparent intergrade’’ between A. glandulosa and A. cushingiana and did not formally recognize it. In later treatments, Wells (1987, 2000a) also did not formally recognize this taxon and considered it to be a morphological form of A. glandulosa subsp. zacaensis." MADRON˜ O, Vol. 54, No. 1, pp. 42–62, 2007

NOW,as of 2013, they list it as Arctostaphylos crustacea subsp. eastwoodiana.