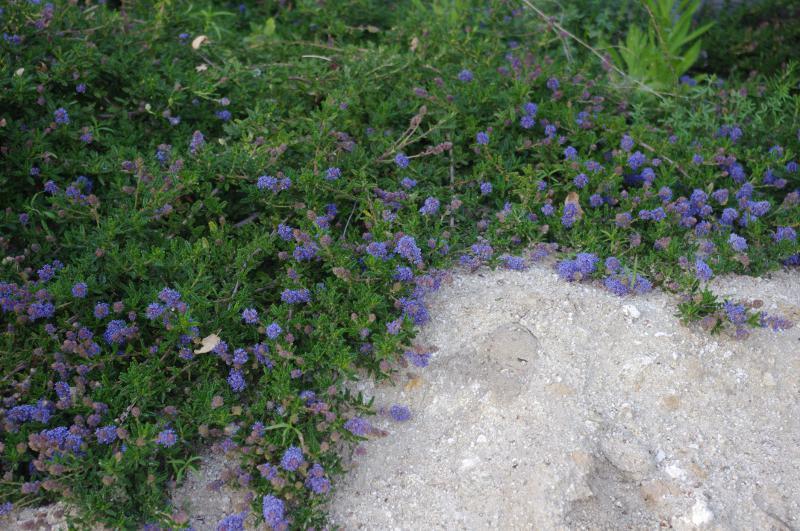 Ceanothus hearstiorum has small, soft, dark green leaves and flowers are blue and show up in late spring. A flat Ceanothus, no higher than 2-3 inches. Ceanothus hearstiorum needs part shade in the interior and some summer water. When this plant is happy it is one of the best looking groundcovers I have ever seen. It loves adobe soil. It is not so good in beach sand.

No frost damage at 17 degrees F., dead at about 12 F.. The best looking plant of this was planted in adobe soil in USDA zone 7a, under an oak in light shade with once per week water.  Not really hardy below about 20F, and sustained temperatures in the 20's would probably knock it out. In the test at Oregon Garden in Silverton Ceanothus hearstiorum was not very hardy.

The worst one of these (that was still alive) was in beach sand in USDA zone 10, twenty miles from where the plant is native.

Ceanothus hearstiorum  grows on the central coast of California where the  soil varies from a near adobe through red clay on hard pan to a gray sand-rock composite. Ceanothus hearstiorum gets summer fog and rainfall of about 20-30 inches. It is one of the most moderate climates in the world. Every day has a high of 60-65 degrees F. and a low of 50 degrees F. The coastal sage scrub plant community has Ceanothus hearstiorum, C. thyrsiflorus, C. griseus, Adenostoma fasciculatum, Iris douglasiana, Lonicera involucrata, some Pinus radiata (in the closed cone pine forest), Baccharis pilularis, Salvia mellifera,Rhamnus californica, Heteromeles arbutifolia, Toxicodendron diversilobum, Diplacus aurantiacus and Lupinus arboreus (among others).

The foliage is scented and can fill a small courtyard with a delicate scent after a rain. Ceanothus hearstiorum smells really good. I don't know .. a forest by the sea. A very nice plant for a San Francisco or Santa Monica garden.