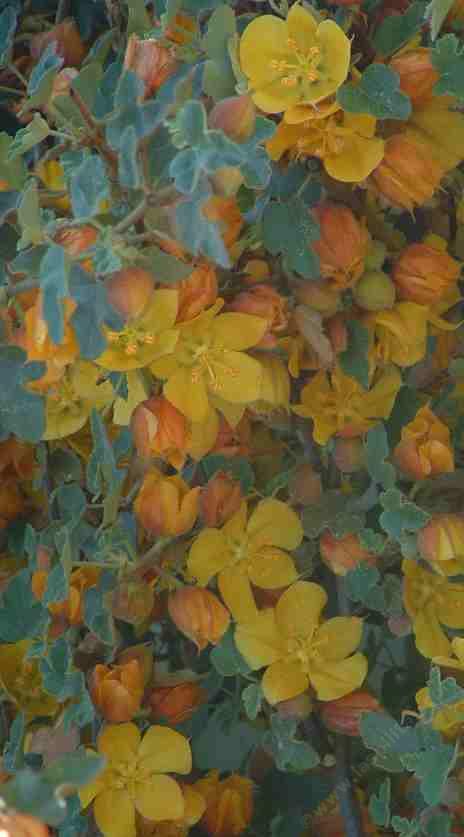 Ken Taylor owned a nursery in the Aromas area for years. Taylor Nursery produced native plants and very rare or unusual exotics. Taylor nursery was also into bonsai which is why he probably was after a smaller fremontia than the species. The Ken Taylor Fremontodendron is an F2 hybrid between Fremontodendron decumbens and Fremontodendron californicum. This flannel bush is smaller and a littler more garden tolerant than most of the other forms. In our garden it is 8 feet by 8 feet; this is a lot smaller than even the species. This form is growing like a weed and flowers from May through August; never a heavy flower set, just continual, 3 inch flowers. Flannel bushes like lighter soils with moisture nearby, but not near the crown. Their favorite spots are sandy washes with moisture down 8 ft or so below grade level. Usually, in heavy soils, and in areas with warmer summers, any extra rainfall or one summer watering will kill the bush after one year or so. Every time, the pathogens take no hostages. If you live with adobe, clay soil and want Fremontodendrons make a big, big flower bed 3 feet or so deep and fill it with sand, plant it, take and water until the roots reach the adobe below, then no more water. If you live in the interior or deserts water extra in spring (also in winter if you are in the deserts), but no summer water after the second year. Fremontodendrons seem to have an intense relationship with mycorrhiza; when these plants are watered in the summer (after the first summer or so), this relationship collapses. As a consequence, Fremontia dies of a broken heart (with the help of Phytophthora and other root rot organisms).