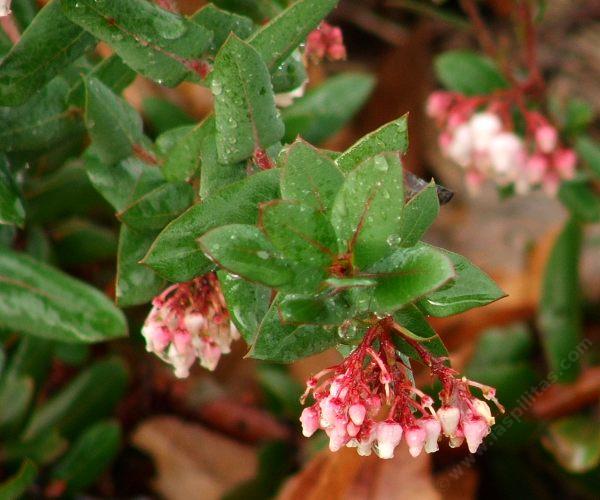 Paradise Manzanita, is a sprawling evergreen shrub, that can be used as a ground cover or small border. This manzanita has dark red bark, white to pink flowers, depending upon climate that year and soil, etc., and bright red Christmas-like new growth. If you keep it pruned once a year you will end up with a three foot-round mass of flame red each fall turning nearly purple here. Paradise Manzanita was in two other coastal gardens where the plants were side trimmed a few times and the manzanitas became these wonderful mounds of foliage colors(green, purple, and red) and flowers. A very unusual, showy manzanita with the red color on the new growth, and the contrast of it with the slate-colored older foliage is so vibrant that everyone that sees this plant in our garden inquires about it. Paradise Manzanita has done fine in full sun to part shade, clay soil to sandy soil.

We have planted Paradise in full sun here and it did ok, planted in full shade it elongated a little, but survived. Without any water and planted in winter, half died, but half survived and did fine through three years of 8 inch rainfalls and 100 degree summers. Probably fully drought tolerant after first year in San Diego, Los Angles, Bay Area or Sacramento.

We lost most of the mother stock in the 2013 dry year (2 inches) and cold (less than 10F for 6 nights in a row). Paradise seems to be fine into the teens on a regular basis and it seems to be tolerant of some drought, such as no water after first year in Los Angeles  or San Francisco.