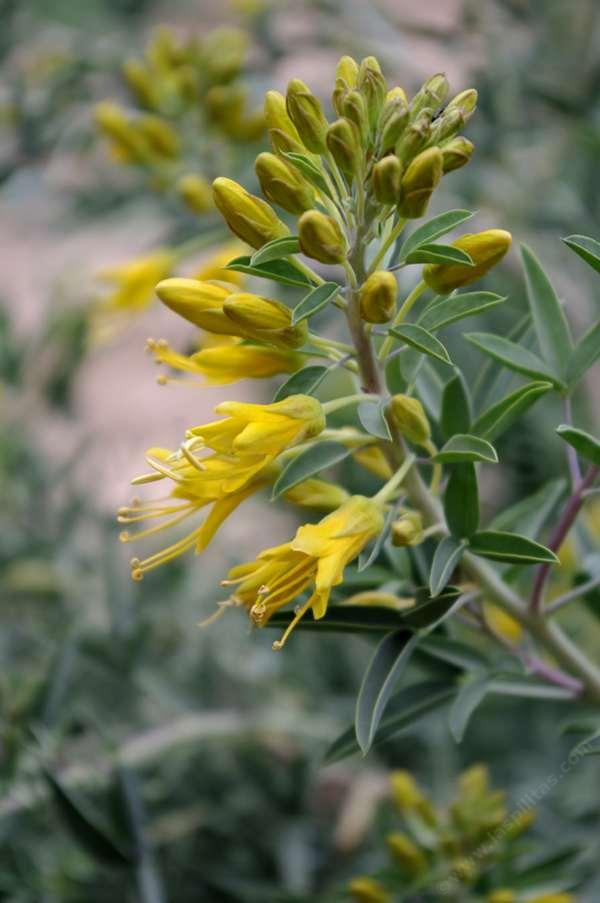 play movie
California Cleome (AKA Bladder Pod) is a distinctive plant with unusual yellow flowers and cool fruits that when dry, resemble a paper lantern that rattles (the seeds inside the dried fruit rattle around). The paltn has a stange oder, described by one of our customers most accurately as "burnt popcorn". In the southern deserts and ranging to coastal San Diego is a form that has fruits that are more narrow and gradually narrowing to two pointy ends, formerly called variety angustata. The other extreme form has globe-like fruits, with two short points on either end, was called variety globosa, and ranges from coastal areas and inland to mid-elevations in southern California to the southwestern portion of the San Joaquin Valley over the southern end of the Sierra Nevada to around Tehachapi. California cleome is an evergreen (glaucous) shrub, 4 ft. high, and a versatile shrub for harsh areas. I have been told seeds and pods can be treated as capers. Isomeris arborea resents overwatering and suffers the most in wet winters. Seems to be deer proof. I have no idea why California cleome loves to be on coastal bluffs, basking in the salt spray. Everything around it looks blow torched, when this one is lush and in flower. In inland areas like Bakersfield it can be found growing with Opuntia treleasei, Brickellia nevinii, Yucca whipplei, Encelia actoni, Ephedra californica, and Eriogonum fasciculatum polifolium in blue oak woodland. Seems to be able to tolerate high alkalinity well. As well as extremely dry conditions. (Syn. Cleome arborea) Syn: Peritoma arborea