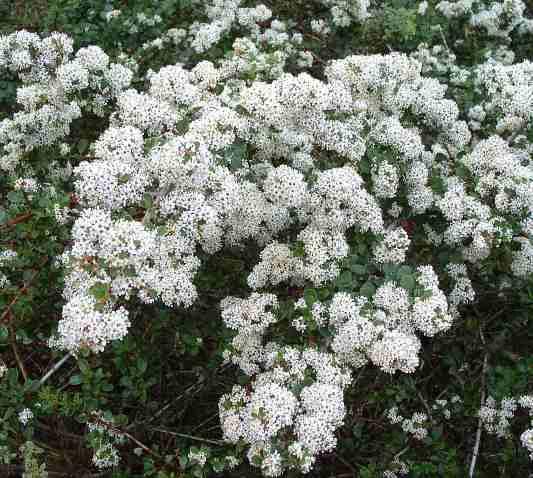 Big Pod California Lilac is an evergreen shrub that usually grows to six feet or so, sometimes higher, but usually compact. This Ceanothus is similar to C. cuneatus but the white flowers are pure white and the seed pods are bigger. Native in the chaparral community, near the coast, from Santa Barbara County to San Diego County, California. We discovered the plants sustained no frost damage at 20 degrees F., but died at 15 degrees F.. John Gray found that the Ceanothus megacarpus chaparral was 3 times more productive than the Soft chaparral next to it(Artemisia-Salvia leucophylla). The form we grow is from the extreme north end of the population, weve never seen one this beautiful. The plants looked delicious when in flower. Companion plants included Tanbark Oak, Vaccinium ovatum, Ribes menzesii, Rhamnus californica and Ribes sanguineum glutiosum. This form is very garden tolerant, deer tolerant and lush. Click here for more about California Lilacs (Ceanothus). Why do the roots of some of the Ceanothus look funny?