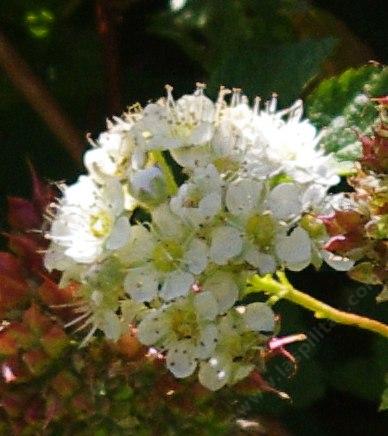 play movie
Physocarpus capitatus, or Ninebark, is a deciduous bush with tiny white flowers in 3"-5" clusters, flowering May through July. Native to the coast ranges and the Sierra Nevada mountains to British Columbia, Montana and Utah. Ninebark likes part shade in hot locations along with garden water. It becomes a drought tolerant plant for the sunny areas at higher elevations or coastal areas. Its bark is distinctive, showing several layers, and interesting texture. The leaves remind one of small grape or currant leaves and turn intense red to orange in the fall. The spring flower show is delightful. The shape of the plant looked like a bouquet when it was in flower. Grows in riparian areas of many plant communities, such as chaparral mixed evergreen forest, and yellow pine forest. In the Sierra Nevada mountains the plant grows more upright, and in the central coast ranges the stems are more spreading and arching. The form we sell is from the central coast ranges and its hardiness is such that we lost most of the gallon size potted plants in the 1990 freeze (-4 degrees F.) Ninebark grows on average 5 ft. high by 5 ft. wide, needs no irrigation water at all in central and northern coastal areas of California. This plant will also tolerate a lot of water when it's dormant (even standing). Ninebark will grow under sycamores (Platanus racemosa) and cottonwoods (Populus trichocarpa) and tolerates serpentine soil.