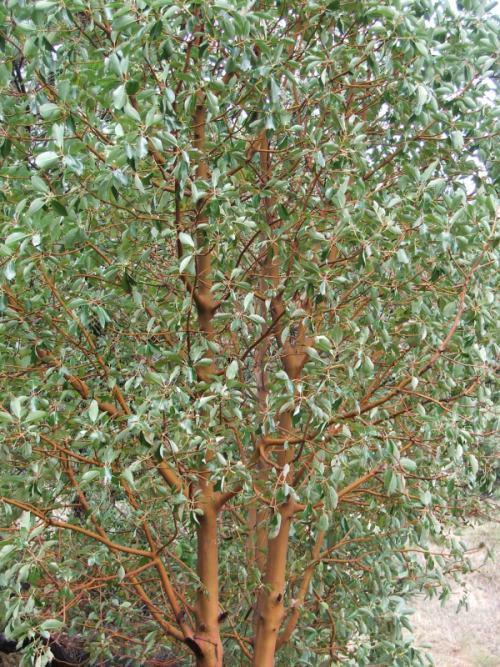 play movie
Usually a small evergreen tree Madrone has peeling, reddish-brown bark, and red edible berries. Sometimes, in some areas, Madrone can become a real tree, but usually it looks more like a manzanita that grew big. Native to the coast ranges, Baja to British Columbia, and the northern Sierra Nevada. Madrone grows best in the shade of its forest companions, such as Quercus agrifolia, Quercus kelloggii, Lithocarpus densiflora, and Umbellularia californica, when it is young. It will tolerate morning sun in the interior. This plant seems to require some indirect summer water after establishment when it is grown in areas drier and hotter than its natural range. Preferring acid soil, (tolerates neutral soil) and good drainage, it is a slow grower when not happy. Seattle customers tell us they've seen 5 to 10 feet of growth each year, inland California it's more like inches. Ours also froze here at 0 degrees F. Birds usually get all the berries each year. In exposed areas they probably will freeze at 5 to 7 degrees F. This tree is grown in the southern part of England. In the areas I've seen it grows on ridges and slopes of good soils that receive 40-70 inches of rainfall per year. This tree needs to be mulched to assure its health and long life. If you have a north slope looking out over the bay or some of those canyons about Los Angels, this is a worthy specimen.