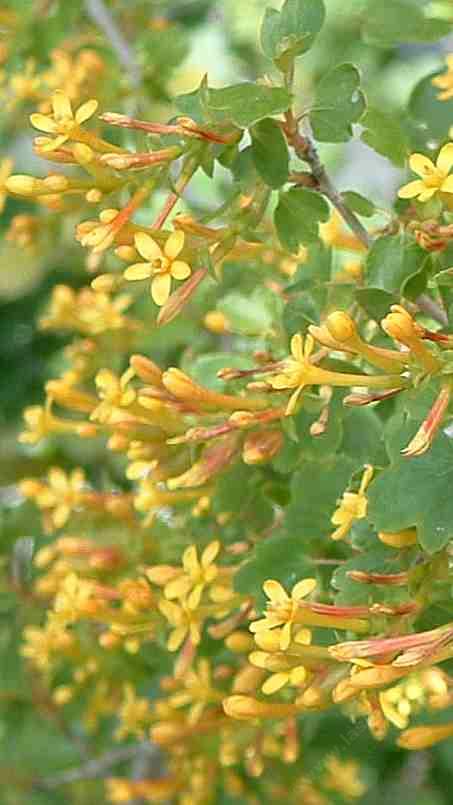 Golden currant is native from Riverside county to the south bay area. In the canyons of Malibu they cover the canyon bottoms, but they also manage to make a stand in the Santa Margarita area where Golden currant grows in decomposed granite in full sun just above our seasonal 'creeks' and is deciduous from late Dec. to early Feb.. Golden currant is almost evergreen along the coast and is a good ground cover under oaks. It flowers within a mile of the ocean in Malibu, but I've never seen currants on coastal bluffs. If you're right on the ocean bluff, you'll need a protected east wall, fence or gully to keep the foliage out of the wind.

California thrashers, with their curved beaks, Robins, Phainopeplas, and Solitaires, love the berries. Bumblebees and hummingbirds love the flowers. Also, monarchs love the flowers in early spring. The fruit varies from to 3/8 inch, yellow to pale red, about 1/3 seed and tastes like a store bought Thompson seedless with a dash of vanilla, some cream of tartar, and maybe a little apple juice.

Click here for more about California Currants and Gooseberries