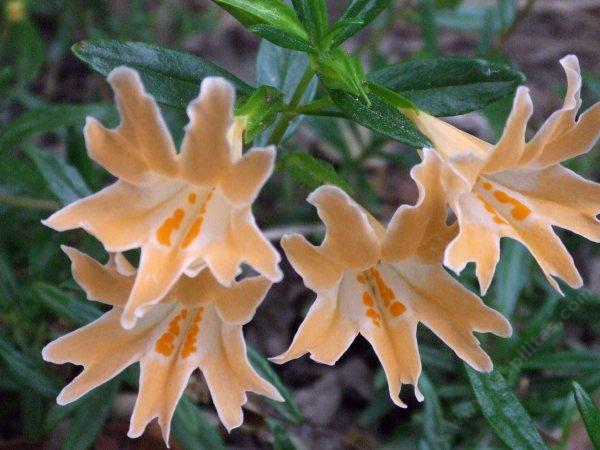 Diplacus grandiflorus,  Azalea-flowered Monkey or Large-flower bush-monkey-flower, is a  very showy California native sub-shrub with flowers that are a pale peach color that somewhat resemble an azalea. This monkey flower is commonly found in openings, south and west-facing road cuts in the areas between the oak woodland and the conifer forest in the central coast ranges and the west-central Sierra Nevada mountains. We've seen this form of monkey flower in the Big Sur area, growing in granite under Quercus chrysolepis and Lithocarpus densiflorus, and above Oroville in decomposed granite under Quercus wislizenii. Azalea- Flowered Monkey Flower normally grows on granitic soils, with hybrids occurring with the other native subspecies as it moves into other soil types(notably in northern San Luis Obispo County.

Denver Botanic Garden has this in a sheltered rock location that fills with snow first. It has tolerated -30 degrees F., in this spot. I've used it regularly in areas that have a 2 foot (.6 meter) wide flower bed next to a lawn. The plant performs best where it has excellent drainage and near garden conditions. It does not like reflected sunlight, nor much shade, but 8 hours of cool sun is great, and high filtered shade is great. On most sites it will live for 10-20 years with no bugs, or herbivore problems.

Common associated plants are such plants as Brickellia, Penstemon, Eriogonum, and Eriophyllum lanatum (and E. grandiflorum). If you're in a deer area you'll need to not water in the summer (after the first summer) so the plant can go semi-deciduous and Bambi will not eat. The remainder of the year you can enjoy an evergreen plant covered with yellow flowers and visited by a few hummingbirds.

This is one of the plants that I can consider mixing in with Penstemon 'Margarita BOP', Eriophyllum confertiflorum, Erigeron 'Cape Sebastian', and Zauschneria 'Mattole River'.