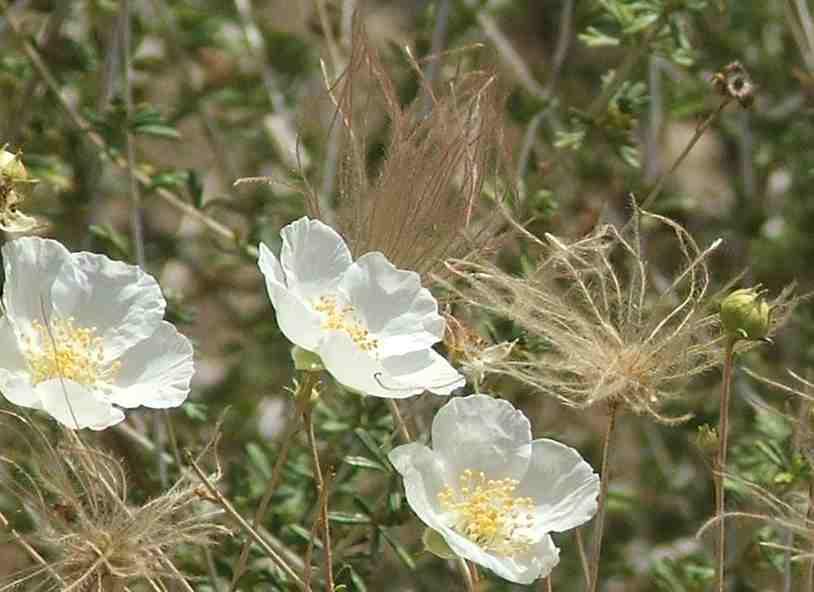 play movie
Apache Plume has white rose flowers, small leaves that are finely divided, and plume-like fruits. Grows normally to 3-4 ft., but can grow to 6 ft. Native to deserts from southern California east to Texas. Likes full sun, is drought tolerant, but likes a little indirect summer water. Use as lacy screen. The Hopi people steep the leaves for a hair tonic. Probably best 10-15 feet from a watered area as we've lost several plants here from drought. In areas of summer thunder showers it should be drought tolerant. This plant is beautiful in desert gardens. One of the best, is showy with no care. Fallugia is usually used individually, which is too bad. I would love to try this as a high groundcover in an interior planting. It might be interesting with Salvia clevelandii or Salvia 'Pozo Blue'.
Having said all that, I found Apache Plume growing in part shade at Cal Poly San Luis Obispo in adobe soil. Granted, it was a native garden. Has also done fine at the Escondido Nursery. Grows with Prunus fasciculata var. fasciculata, Yucca brevifolia.