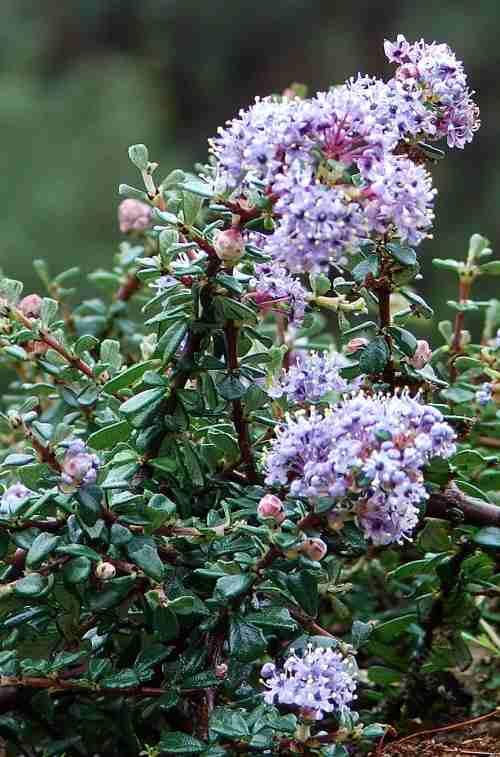 Maritime California Lilac is native to San Luis Obispo county where it grows on old ocean beaches and bluffs. The soil varies from a near adobe through red clay on hard pan to a gray sand-rock composite. Ceanothus maritimus receives summer fog and rainfall of about 20-30 inches in one of the most moderate climates in the world. Every day has a high of 60-65 degrees F. and a low of 50 degrees F. The coastal sage scrub community has Arctostaphylos hookeri ssp. hearstiorum, Ceanothus hearstiorum, C. thyrsiflorus, C. griseus, Adenostoma fasciculatum, Rhamnus californica, Heteromeles arbutifolia, Iris douglasiana, Lonicera involucrata ledebourii, some Pinus radiata, Baccharis pilularis pilularis, Salvia mellifera, Toxicodendron diversilobum, Diplacus (Mimulus) aurantiacus and Lupinus arboreus (among others).

Ceanothus maritimus grows flat by three feet. Its small, dark-green, holly-like leaves give it the look of prostrate cotoneaster. Although Maritime Ceanothus likes coastal areas best it grows astonishingly good inland with high shade or shade during the heat of the day and regular water. Much more hardy than we would have ever guessed. A Ceanothus to try in coastal Washington or even on much of the east coast.  In December 1990, this one proved to be as hardy as the higher elevation species. A couple of these in gallons were the only survivors in a block that was in a cold sink of -2 to -4 degrees F. The ground under the gallon pots froze to 18 inches for two weeks. Although not a fast plant, expect it to take a while to fill in. The stems root along the ground forming a wonderful flat ground cover eight to ten feet across with no ground showing.

On coastal bluffs where the spray doesn't hit it directly it is unsurpassed. When in flower makes a sea of blue, three to six inches tall. We've also found it very useful in sites where the soil is unusually high in boron or sodium. The plants we utilized did not succumb until the boron was above 5 ppm and the sodium was above 500 ppm. C. maritimus grows best in heavy soils and is a rare plant.

Why do the roots of some of the Ceanothus look funny?