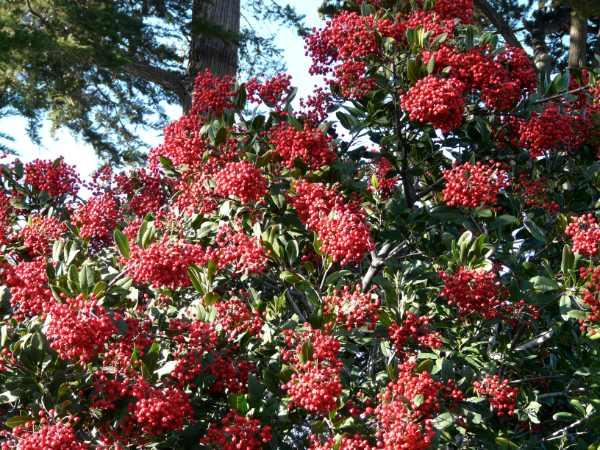 Toyon, or as it's sometimes called, Christmas Berry, is an evergreen shrub to small tree that usually grows to 6-8 ft. high and 4-5 ft. wide. Toyon can go to 15-20' tall if it's old and happy and become a delightful evergreen multi-stemmed tree with white flowers in summer and red berries in winter.

Toyon is native to much of California, with a few plants wandering over the Oregon border. Don't get excited it was on a mile or so. Heteromeles is drought tolerant after the first few years, but tolerates some water if drainage is good. Relatively fire resistant, (a non-watered Toyon is about the same as a watered apple tree). Toyon likes full sun, but  tolerates full shade. Tolerates serpentine based adobe soils, but also lives in beach sand. The berries are kinda edible but awful and contain cyanide compounds that can kill you if you eat a few pounds. Better for the birds. I had one student make a cherry pie out of them that wasn't bad. (The same cyanide compounds volatilize off and leave the cherry flavor when cooked.)

Deer will eat this on bad years if it's been watered at all. If you protect it for 3-4 years and get it well established they don't hurt it very much (they eat the new growth and leaves below four feet). I find it fascinating that it is not reliably hardy at the Santa Margarita nursery site but on the south slopes on a narrow line half way up. We do not find it in most of the creek (where it is in many other plant communities) or on north slopes. It is hardy to about 0 F., at -5 F. it can(not always though) grow back from the crown. It is native in beach sand 1/2 mile from the ocean and it grows into the middle Sierras. It has some problems with leaf fungus and bacteria near the coast(needs good air flow). Decent air flow and no summer water after first year in coastal areas. Inland they will tolerate regular water and even heavy shade.

Toyon grows with Quercus agrifolia, Quercus lobata and Quercus douglasii. A nice plant in many areas. Great hedge plant if mixed with Coffeeberry, Manzanita and Ceanothus.

If you need to prune Toyon, it prefers a little all year of if heavy, only in August-September. Toyon can come back from a extreme pruning as it is a crown sprouter, but it was made to only do that every 100-300 years. Pruning it down to the ground every year or even every few years  will kill it or make it very disease prone, (the fungus and bacteria again).