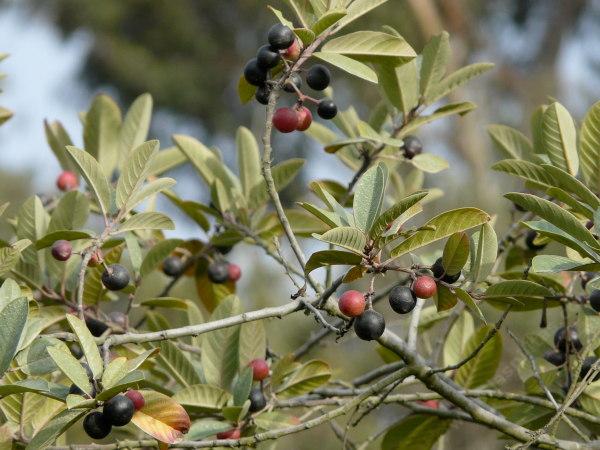 play movie
Coffeeberry is an evergreen shrub that grows fast to 6-8, sometimes as high as 10 ft.. Coffeeberry is native from the Oregon Coast ranges through most of California into Arizona and Baja. Coffeeberry likes sun to part shade and has low water requirements. It is one of the few bushes that will generally tolerate few shade in coastal gardens.

The berries turn red, then black, then whatever color the bird is that eats them in your area. Robins, Thrashers, Thrushes and Tanagers and such come to mind.

This plant is almost always deer proof. We had it on sites throughout California and the deer didn't bother it until the 6th year of drought and they decided it was edible. What I can't figure out is how they got together state wide and changed their minds all at once. On some sites the bushes had been untouched for 20 years and in one week they were defoliated. The same week in Cambria, Paso Robles, Monterey, and the lower Sierras? Maybe they're smarter than we thought. Hooked up with Walkdeer radios?

We had one other problem on a site where I removed the weeds with a weedeater and planted them. There was a colony of grasshoppers living in the weeds and they defoliated my plants. I replanted for the customer, leaving the old plants, and 6 months later I checked back and they had the old plants and the new plants! Both were 6' tall! Needless to say the customer was impressed.


This plant doesn't have flowers for show but it looks trimmed without trimming, has reddish tints on dark green foliage and can be walked away from in most plantings after a season.

Coffeeberry survived the December 1990 frost in gallons fairly well. Not great but the root ball got down to 8 degrees, it puts it somewhere in the hardiness range of Euonymus fortunei var. Colorata or Mahonia aquifolium. Surprised us again!

BUT, in Jan. 2007 the fourth night below 10 F. and one night at around 0 F killed a full sized bush that had survived a tour bus. Use the species when you need a tough but clean 8-10' hedge. We also like coffeeberry for a fire break because it will tolerate "wash off" water once every two weeks. With regular water it burns very poorly indeed. Coffeeberry does track well with the lack of summer rainfall, so after the third year, no deep summer soaks.


So great wildlife plant, nice looking, good wildland interface plant, adds drama to a boring garden, great hedge plant, good screen plant, so what are you waiting for, me to plant it for you? This bush is very tolerant of soils, garden conditions and stupid mistakes, just make sure you water it once a week for the first year or so.