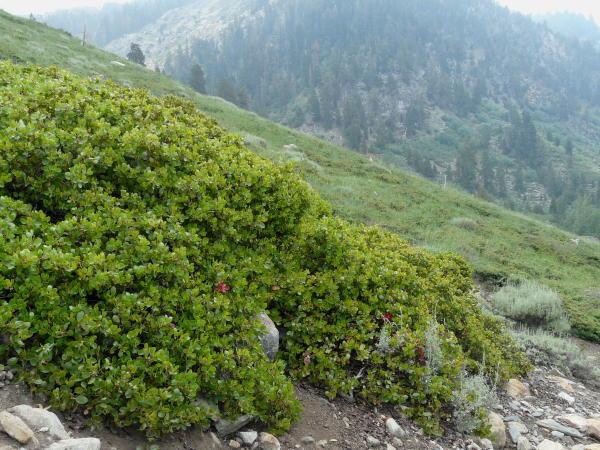 Greenleaf Manzanita, Arctostaphylos patula, is an evergreen shrub that is common in areas of heavy snow at higher elevations in the eastern Sierras through Utah and north into Oregon, extending down into Lake County, California. Greenleaf Manzanita is pleasing in appearance and seems to a very stable manzanita at the Santa Margarita Nursery.

We had some in 15 gallon pots for a decade that were buried behind a shade house in heavy shade, (It's amazing what you find when you tidy up an area.) Dug and drug out the fifteens and planted them in full sun. We hate throwing things away, why not give them a chance? They grew with no water, in full sun, they grew! Amazing.

The only thing this manzanita does seem to hate is salt in soil or water. It's not as sensitive as some of the other Sierra species, but I'd not try it in some of the alkaline areas of the San Joaquin valley. A weird form of this species occurs at Arrowhead nor Big Bear, (Arctostaphylos parryana pinetorum).

In a normal California Garden greenleaf manzanita makes a green mound about six foot tall with open red trunks.  If you get 10 feet of snow expect the same plant to grow only a couple of feet tall. Very similar to Arctostaphylos stanfordiana, it might be interesting to blend to two.