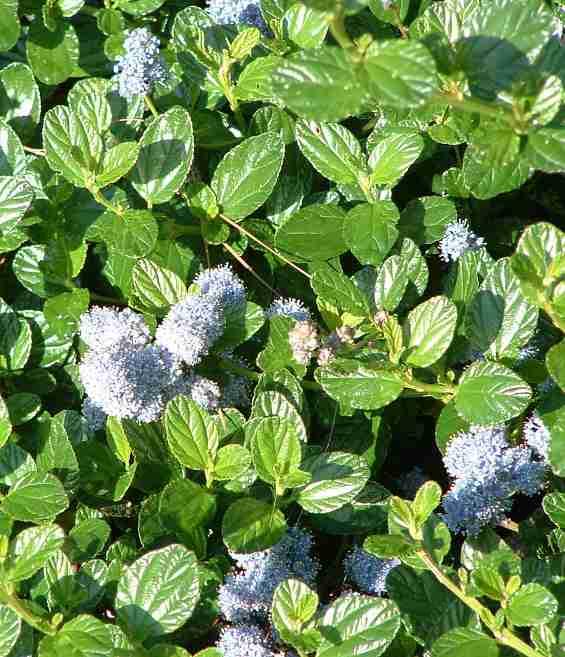 play movie
Ceanothus Yankee Point' is an evergreen shrub that commonly grows two or three feet tall and ten feet wide. A mounding mass of glossy green with blue flowers in Mar-May. Does best near coast, but good in coastal valleys, and ok inland if given a little afternoon shade and weekly sprinkles. VERY useful for large bank stabilization. Mix with a few Fremontias, Salvia Pozo Blue' a splash of Eriogonum fasciculatum, arborescens, or giganteum and a few live oaks.
Plant on 10 ft. centers, as it will usually be that big in 3 years. If you want fast fill-in plant Salvias and Monkey flowers in between. Yankee Point Ceanothus will roll over them leaving color sticking out here and there in the sea of green.


Yankee Point can also be used as a formal hedge and tolerates sheering with a hedge trimmer well. (It doesn't like hacking though, a couple of hard prunings can kill it. Keep the garden hacks away from it.)


This species the deer love; will seek it out and eat it roots and all for first year or two(nary a speed bump left). Use Ceanothus Joyce Coulter', Snowball' or porrectus if the deer are hanging about waiting for lunch. OR Not as hardy as many others Ceanothi, the container stock died at 10-12 degrees F., tips burned at 15-18 degrees F. The plants in the ground were destroyed at 0 degrees F.  but tolerated most of a week below 32F and nights of 10 with only some tip burn. (If you see a little frost on your windshield, don't freak out,  you are NOT too cold.) This California lilac was selected by Maunsell Van Rensselaer of the Saratoga Horticultural Foundation in 1956 from plants collected from the Carmel Highlands in 1954.
Click here for more about Mountain Lilacs.