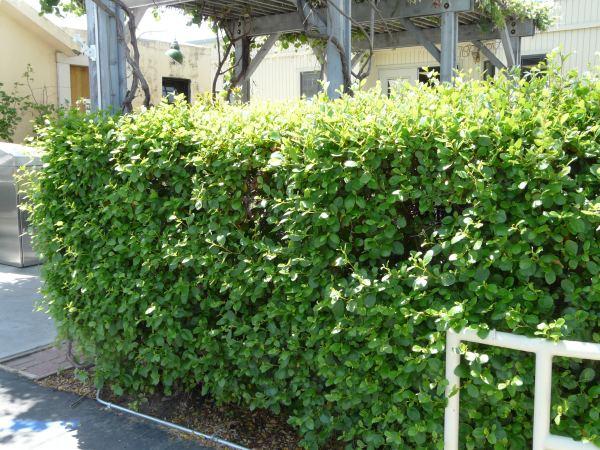 Island Mountain Mahogany, Cercocarpus alnifolius (Cercocarpus betuloides var. blancheae) is an evergreen shrub, 12' tall, 4' wide, with leaves to the base. This Mountain Mahogany is similar to Cercocarpus betuloides, but the leaves are larger and it is more garden tolerant. A bush-tree that looks like a compact evergreen birch. Because of its narrow habit it is an excellent screen or large border shrub. These plants have survived hot and cold for nine years here with no water and no care. Christmas, 1987, we had considerable burn on the foliage at about 15 degrees F. In 1986, the same plants had little or no damage at 12 degrees F., four nights in a row. In December, 1990, these 'evergreens' became deciduous at 0 degrees F., but recovered with no damage. They look great! We sell a whole lot of these to people who don't want to see their neighbors but only have a 3-4' wide area with which to work. Remember deer eat this, so do not plant it where they are in high numbers. This variety is uncommon in California. All the Cercocarpus species are nitrogen fixing (Pinyuh) and good for revegetation, erosion control and wildlife.
Synonym: Cercocarpus betuloides var. blancheae.