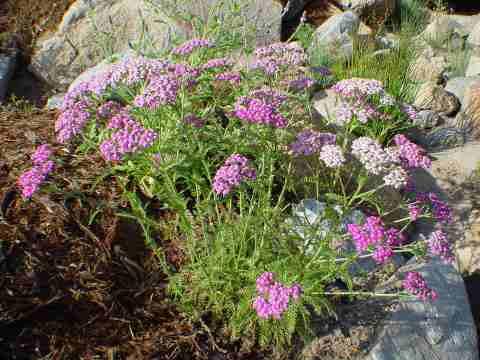 (Achillea borealis ssp. californica (Munz)) Island Pink. Yarrow is a perennial that spreads by rhizomes. It varies by locale from one to four feet. Some plants of each population will have 3- 4"clusters flowers that range from white, to pink to red. It's native to the western U.S. and is drought tolerant, swamp tolerant, somewhat alkali tolerant. Give full sun near coast, part shade inland. This species is now considered A. millefolium and is found throughout the northern parts of the world. The pink forms are sometimes called var. rosea and the red forms var. rubra. This form was found on the Channel Islands off the coast of California near Ventura and has pink flowers. The flowers vary from white to almost red. You may plant it out and get a white flowered plant, complain loudly(thank most of you for being nice), only to have a bunch of pink new plants next to the old one the next year.