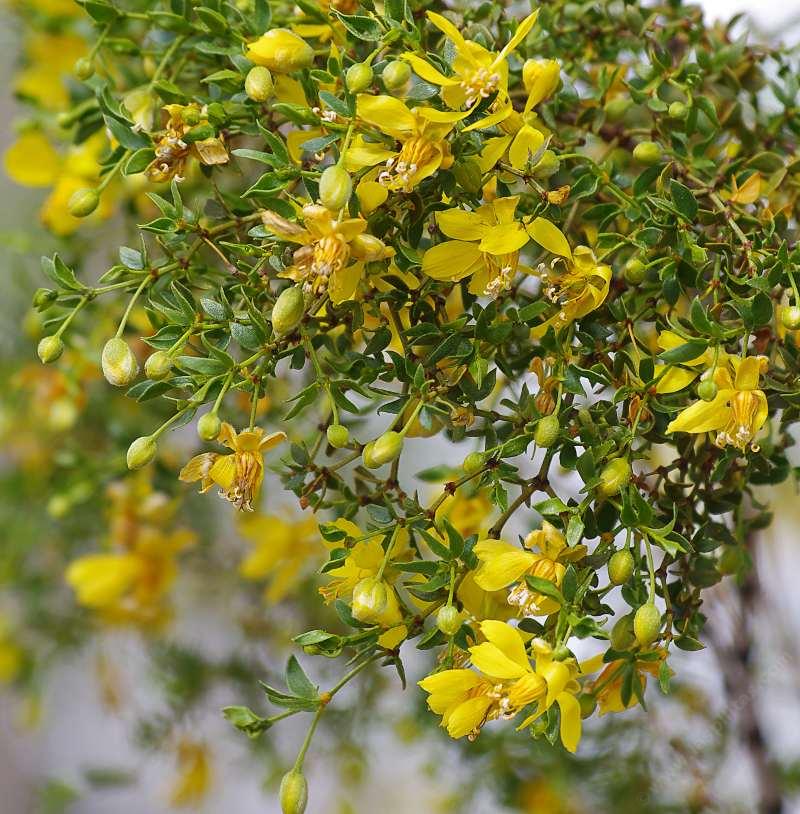 play movie
Creosote Bush, Larrea tridentata, is an evergreen shrub of the deserts. Creosote Bush slowly grows to 6 feet tall and 8 feet wide. A very drought tolerant desert plant that adapts to pruning, and water to become an excellent patio shrub or hedge. Creosote Bush has a delightful fragrance that fills the air with a clean pine scent after a summer rain. A group of these plants are now believed to be the oldest living things, 11,700 years old (Vasek, Fremontia 7, 3-10). Creosote Bush has done well here with no water after the first watering. Not superfast it has grown here a foot a year and considering we haven't lifted a finger towards it in 30 years it looks great. Creosote inhibits competition by forming water-repellent soils (see Cercidium floridum). Many people believe the leaf to have curing properties, BUT it can cause hepatotoxicity(hepatitis) after two weeks of use.(Grant, et. al. 1998)
Creosote Bush commonly grows in loose soils, sometimes in the washes, sometimes on the slopes, even where the soil appears to be clay it is not compacted but loose or with a lot of rocks so the roots can be aerated.
If you live in a higher rainfall area make sure you plant your plant in loose soil on a slope.Our 30 year old plant looks great in dry years, hangs on in wet winters.
There is a South American form (Larrea divaricata) of Creosote Bush the scientific name seems to get changed back a forth by every botanist that packs a crayon.(Larrea divaricatum subs. tridentata, Zygophyllum tridentatum, Covillea tridentata, Schroeterella tridentata, Neoschroetera tridentata, and  Larrea glutinosa ) In South America the Creosote lives in an area much like it does in the United States and Mexico. Barren except in spring when the desert comes alive with perennial and annual wildflowers. The South American form is even associated with similar shrubs and trees, notably Atriplex, Prosopis, Acacia, Cassia and Cercidium.