The 'Ray Hartman' form of mountain lilac is an evergreen shrub to 15 ft. or so.. The flowers are light to medium blue in 6" flower spikes. The 6" leaves are glossy and dark-green. It is very fast to 10' in 18 months. We planted some in Santa Margarita, California, and they were just under the telephone wires (20') after 2 years. Ceanothus 'Ray Hartman' is very drought tolerant. One was planted next to an old PG&E sub-station (Santa Margarita, California) in the late 1960's, and it's still doing fine in the year 2003. The substation is long gone, and there has been no watering or maintenance for 30 years or more. This one is ok in heavy soils or sand. Upright growth in most gardens, and a somewhat weeping habit when it sees snow. This hybrid Ceanothus, with parents Ceanothus arboreus and Ceanothus griseus, had no cold damage at 15 degrees F, severe damage at 8 F, and death at 0F.

Deer love the new growth on this one, so do not plant in a high deer area unless you fence for the first few years. 'Ray Hartman' has been reliable in most situations including interior heat.

We have also seen beautiful specimens on the streets of San Francisco in the Haight-Ashbury District. Narrow enough to make a superb screen or hedge.

Root nodules grow on the Ceanothus Ray Harman. This is good!

Ray Hartman was the owner and manager of Leonard Coates Nurseries and one of the founders of Saratoga Horticultural Foundation. Ray Hartman Ceanothus was introduced in the 1950's after being found in Ray Hartman's Saratoga garden in the 1940's. This has been a very stable hybrid of Ceanothus.arboreus and C. griseus(with maybe something else). Click here for more about Mountain Lilacs.

The myth of Ceanothus being short lived is primarily spread by incompetent gardeners that insist on applying drip irrigation, summer water and soil amendments. Upland native plants hate all three. Expect a 25+ year life in most well tended (no overwatering, no soil disturbance, no fertilizing, no drip, no application of soil amendments) gardens.

This plant is sold out right now. The worker bees are working on it.
Ceanothus Ray Hartman as street tree in SF 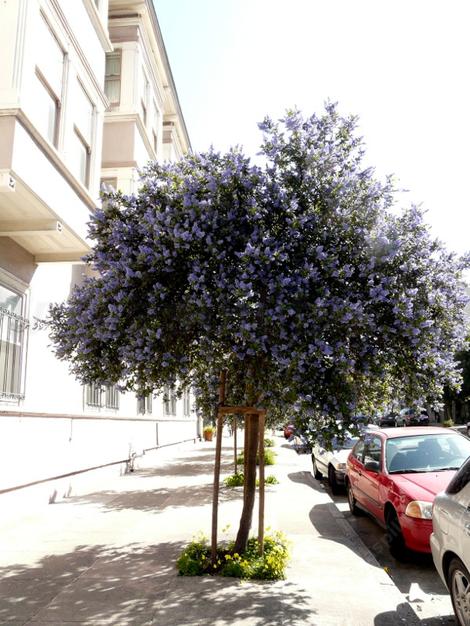 Ceanothus Ray Hartman is neat as a small tree

Ceanothus Ray Hartman in flower on a plant that is now 32 years old.

Ceanothus Ray Hartman is a host for Frankia. Nitrogen fixing bacteria. These are good and live with the roots. Some of our plants have them, some do not. Please leave them. Read our page on Frankia.