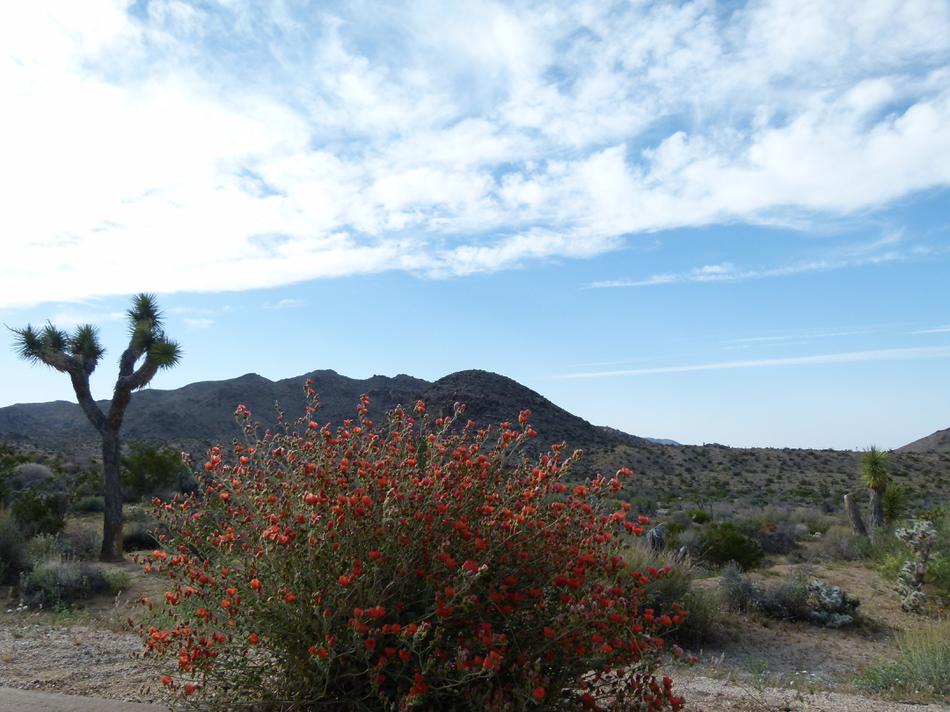 Desert Mallow is a two foot perennial with many one inch orange flowers on a two to three foot spike with gray, almost fuzzy foliage. Desert Hollyhock is another name for the plant with its flower spikes that can occur most of the year here. Desert Mallow needs sun and good air flow. Grows throughout the deserts from Baja California to Utah. We have seen this in the White Mountains at 8000' and growing just above Bishop. There are pinkish forms around Mojave, sometimes growing into the pine forest, sometimes into oak woodland, often into juniper woodland. This bright orange perennial grew into a five foot bush down by the Mexican border. The customer kept describing a five foot bush that was always in flower with these wonderful orange flowers. He never watered it, and it grew to five feet in one season. Needless to say, we were confused, as it's usually only two feet tall; in bad spots in the upper desert, this flowering perennial may only be one foot tall. In San Diego, Desert Mallow looks like a five foot Fremontodendron with flowers on it all the time. It seems to be stable as long as the rainfall is between 5-20", with sun and air flow. Cut flowers are great for bouquets. Also grows among boulders, with Physalis crassifolia, Encelia farinosa, Salazaria mexicana, Xylorhiza tortifolia, Atriplex hymenelytra, Nicotiana obtusifolia, Peucephyllum schottii, in the creosote woodland.