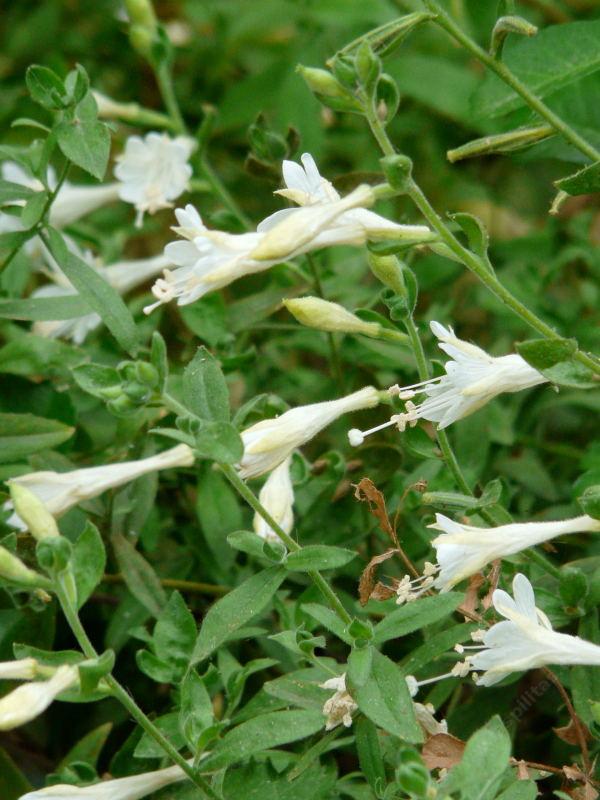 This white form of California fuchsia was discovered off the Eel Rive, by Ted Kipping where it was growing atop a huge bolder. White California fuchsia is not drought tolerant and wants regular water here along with part shade. It will work in coastal gardens as long as you can give it some water. Once per month is okay after the first year. This form is not as hardy as 'Uva Canyon' and you might lose it in the Seattle area. It only grows a few inches tall, but with regular water suckers into a 3' patch. Very effective on a north foundation if mixed with Yerba Buena, Douglas Iris, Hummingbird Sage and a log or boulder. (Zauschneria is also know as Epilobium.) Ted Kipping "Hi, so glad you are still growing the white Zauschneria from the Eel RIver. Years ago, early Eighties, I organized several river botanizing trips down various branches of the Eel. One of those furthered the work of Gladys Smith & Claire Wheeler in the production of their FLORA OF MENDOCINO. Walking up one of the scores of side creeks, I spotted a lovely matting plant growing out of the side of a large boulder in the side stream. I took a cutting of it and subsequently gave it to Ray Collett at UCSC Arboretum as I knew that he and Brett Hall were assembling a big collection of them. Later we were all surprised and delighted that it should have a good white flower as well as a nice tight draping form. "
More California Fuchsia, Zauschneria or Epilobium