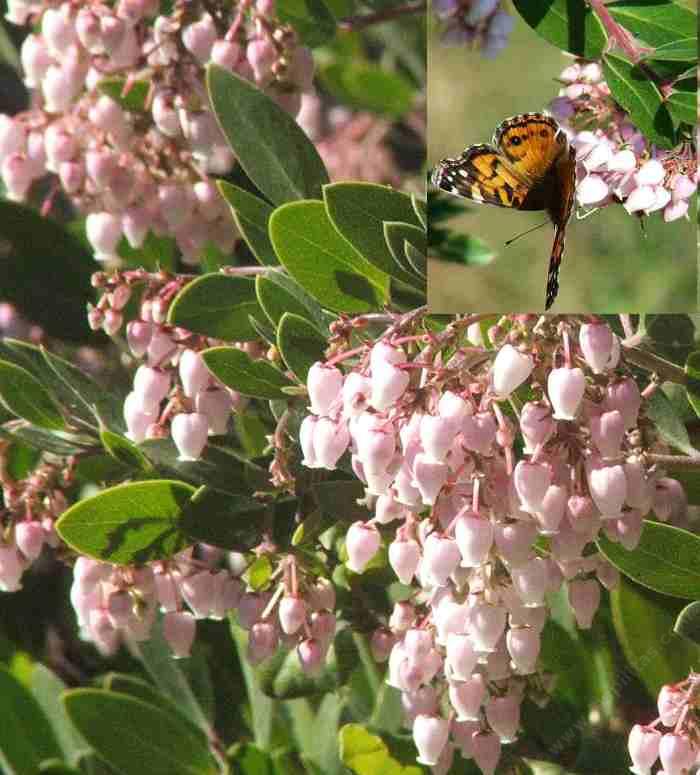 Arctostaphylos densiflora 'Sentinel' was selected way back when as an upright floweriest of manzanitas in the stand. This three to four foot manzanita (that can be pruned up to  eight ft. with some work)  is a very floriferous manzanita that was part of the hybrid swarm of manzanitas in and around Sonoma County, California.

'Sentinel'  is like its cousins  'Harmony' and 'Howard McMinn'  manzanita but grayer. Sentinel' manzanita will tolerate heavy, rich soils but much happier in sandy loam or sand and is more drought tolerant than the other Arctostaphylos densiflora cultivars. One of the best performers in beach sand, also is known as very clay tolerant. Sentinel manzanita is one of the plants that has survived our (lack of) care in the garden here. Like most other manzanitas does not tolerate direct salt spray. BUT, it has survived in Los Osos where other plants showed salt spray damage. A lemon tree had no leaves due to salt spray and the Sentinel was looking great.

Sentinel' has red bark and seems to be one of the faster manzanitas. Ours has grown to full size in 2 years. Our mother plants took a hard hit at 5 degrees F., but they did survive. Sentinel has done ok in Portland, Oregon. (You might lose them in Portland or Seattle every 20-50 years.)

Fantastic as a low hedge for perimeter of a city yard. Beautiful next to the sidewalk, particularly brickwork,  or as foundation planting. Also works well as a stand alone specimen in a small yard.

One of the best plants we have for beneficial insects and hummingbirds.