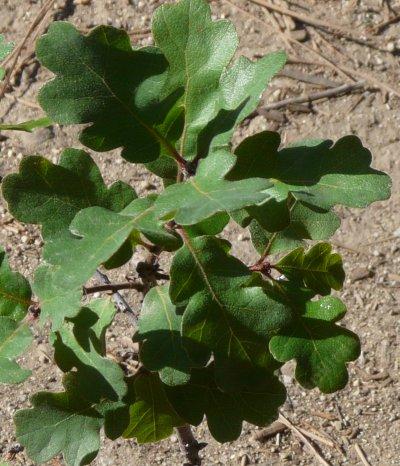 Oregon Oak, Quercus garryana is a deciduous tree much like Quercus Lobata but twisted and bent a little. A 'white oak'. The range of the 'white oaks' seem to Quercus engelmannii, in Southern California, Quercus lobata from about Los Angeles/Orange north to Redding, and Quercus garryana from higher middle elevations of Kern county north to Vancouver Island, British Columbia. I'd say Oregon Oak, Quercus garryana seems to follow summer humidity, but they occur around Tehachapi. Peattie quotes Douglas "several of the native tribes ..gathered (acorns) in the months of August and September, and deposited in pits on the margins of lakes and streams so that they are completely covered by water, in which state they lie till the following winter, when they are taken out and without any other preparation than simply wiping, they are eaten as an article of food.The smell is disagreeable and, as might be expected, they are far from being a palatable flavor". Wow, I could sell these on ebay. Peattie also says "The chief beauty of the Oregon white oak is in the light hue of the bark, almost bone-white sometimes. The great trunks, of a winter twilight, when the leaves are fallen, may stand out almost like cemetery slabs, with a strangely ghostly effect, but by day their pale bark has a look of cool elegance. Sometimes, where the fog or rainfall is heavy, the trunks and boughs are rimed with emerald moss which flows every twist of the gnarled branches till they look like something out of a Grimm fairy tale." Now that's how to sell trees. In the past this white oak was used for carriages, wagons and cabinet making as it's wood is strong, hard, close-grained and tough. Oaks.