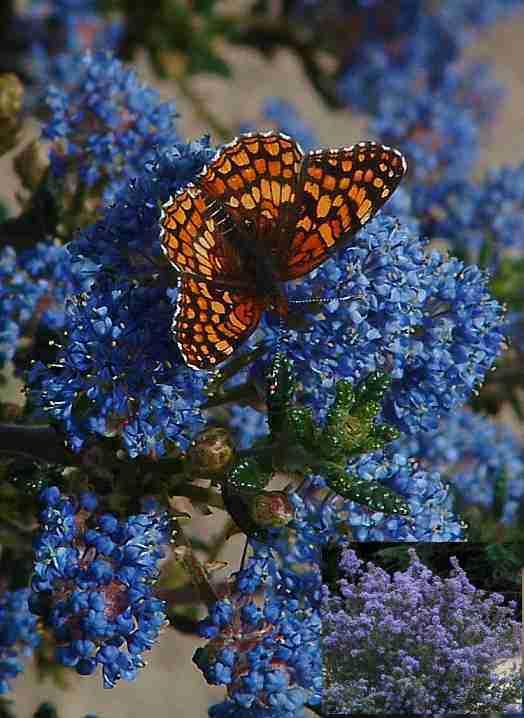 play movie
Julia Phelps reaches six feet near coast, and eight feet inland, produces very showy, dark blue-purple flowers. The leaves are small and crinkly, foliage is a dark- green. The whole plant appears purple in spring as the flowers emerge. The foliage is scented after a rain or in summer heat. Some Ceanothus 'Julia Phelps that are growing in the town of Santa Margarita in rich bottom land soil with a high water table are 12' tall, dark green and you can see the flowers from an airplane. This plant is hardy to 4-5 degrees F. in moist ground, maybe 12 F in dry ground. The plants have survived here on rainfall (during our 7-9 year drought) for years but look a whole lot better with a little spring water. There are a couple just outside of Santa Margarita, California, that were planted in the 1960's, have been cut to the ground twice that I've seen, with no water or mulch, and they are doing ok. Julia Phelps is fairly drought resistant and needs no extra water along the coast; in the interior it can thrive on a few spring or winter waterings. Use as a small specimen tree or hedge in a native landscaping. Plant in the middle of Encelia californica to make a show stopper landscape.

The myth of Ceanothus being short lived is primarily spread by incompetent gardeners that insist on drip irrigation, a summer water program, fertilizing and the addition of soil amendments. Most California native plants hate all that stuff. Expect decades of life in most drought resistant gardens. The blue in the flowers was very difficult to photograph, until the Checkerspot Butterfly landed. Click here for more about Mountain Lilacs.

This California mountain lilac is a hybrid evergreen shrub that was introduced by Saratoga Horticultural Foundation. The original Julia Phelps was probably a seedling of Ceanothus roweanus and C. impressus in 1945 by Thomas Marken (the seeds came from Lester Roundtree)and given to Dudley Phelps who was the propagator of Saratoga Experimental Gardens.