Some of the dominant plants

Central Oak Woodland or Foothill Woodland has many flavors.

We refer to it as Central Oak Woodland instead of the older name Foothill Woodland because foothill implies that it is only in the foothills. Nope; this plant community formerly occupied a number of valleys, but the flat land was easier to clear for farming, and the trees were easier to harvest. Moreover, the water table in many areas of the San Joaquin Valley has dropped, due to overpumping, from standing water (Tulare Lake) in the early 1800's to 800 feet under the surface presently. Many of the native trees, notably Valley Oak (Quercus lobata), require a water source within 70 feet. Central Oak Woodland is sometimes referred to as the Digger Pine belt. (Some people are offended by the term 'Digger Pine', most of our customers of indigenous heritage ask for digger pines, but that's an aside) and we suspect that Digger Pine trees are missing in many of the areas where they occurred because of frequent fires and removal by man.
Oak trees in California usually have two types of root systems, one deep (for bringing up water) and one shallow (their nutritional and immune system). Oak trees act as a water lift, pulling water from deeper soils and sharing with their companion plants. Associated plants that grow in the deeper soil openings and under the oak tree canopy have roots in different soil levels than the oak. A shallow oak root system is directly under the litter layer (oak leaf mulch layer). This oak leaf mulch layer, or litter layer, is critical to the health of the oak tree. At the place where the oak leaves contact the soil, a specific group of microorganisms prevent the quick breakdown of the leaves, and so hold that nutrition in so-called storage, and at the same time, slowly break down some of the leaf material, and so extract nutrients as needed, and share these with the oak tree. If the litter layer is replaced by alien plants (alien, annual grasses, vinca, ivy, thistles, and many others) and their litter (dead alien plant parts laying on the ground), this oak leaf- bare soil interface is missing, which is the mini-habitat for the specific group of microorganisms, and so they die out, and are replaced by another group of microorganisms that can live in the thick thatch of alien plants and their litter, and very few oak leaves. Where do the oak leaves go when the alien plants and their litter replace the oak leaf litter? We are not sure, but believe that either they are broken down quickly by the new group of microorganisms, or removed by small fauna, or removed by some other means, or maybe the oak tree, reacting to the stress of losing the litter layer, is not dropping as many leaves onto the ground but holding them on the tree (The answer to this question would be a great thesis for some enterprising student). Anyway, the oak leaf-bare soil interface habitat is gone, and the ability to acquire food or nutrients, is lost, and the oaks are left with essentially only their deep root system and will weaken and be more susceptible to a variety of diseases and decline. For information on what to do if you inherit a weak and sick oak surrounded by alien grasses and weeds, see here.

Cities and towns that were historically in the Central Oak Woodland plant community.

If your town is between the pink dots, you too are a possible garden site to create an oak woodland.

Much of this plant community has been completely erased and replaced with weeds. The trees are gone, their understory plants and associated plants not even a memory of grandparents. In a several-thousand-square-mile area, from central Tulare County up into the Modesto area, there is less than 10% or so of the trees left, and almost nothing else but weeds.

Planting back a yard, school, acre, roadside or any other available plot of land with plants from this plant community within the historic area of the plant community can be quite rewarding. Small wildlife will find your garden. Hummingbirds, butterflies and other insects that look like they might be friendly show up.

In the inland valleys, including the San Joaquin, the Valley Oak (Quercus lobata) had as its companions, Alkali Wildrye (Elymus triticoides or Leymus triticoides) along with Elderberry (Sambucus mexicana), Coffeeberry (Rhamnus californica or Rhamnus tomentella), some Toyon (Heteromeles arbutifolia), Honeysuckle (Lonicera interrupta), and many other species.

The picture to the right was taken in the central coast ranges of California, and is a portion of Central Oak Woodland, with Coast Live Oak (Quercus agrifolia) and an understory of Hummingbird Sage (Salvia spathacea), covering one-half an acre.

On one of the botanical surveys we tripped across a glimpse of the past in an area of Central Oak Woodland. Most of the Paso Robles, Shandon, and San Miguel, California, area has been burned too many times to have much left other than a few trees. The Central Oak Woodland is far from complete. In one spot, though, there was an old pocket of plant community that hadn't burned because of the topography. Big Berry Manzanita (Arctostaphylos glauca), Hollyleaf Redberry (Rhamnus ilicifolia), Hollyleaf Cherry (Prunus ilicifolia), and Toyon (Heteromeles arbutifolia) were still under the Blue Oak (Quercus douglasii and Valley Oak (Quercus loabata). Under the shrubs were Yerba Buena (Satureja douglasii), Wild Rose (Rosa californica), Snowberry (Symphoricarpus albus), Hummingbird Sage (Salvia spathacea), Maidenhair Fern (Adiantum jordanii) and many other species! This patch was a tiny healthy sample of a plant community that used to exist throughout much of the inner coast ranges and in the lower elevations of the Sierra Nevada mountains from Keene to maybe, the foothills above Modesto.

Here's a consequence of grass introduction that I've never seen in print. Wild Oats were introduced early, either by landfall of Drake or Cabrillo, or by 'wild' horses from New Mexico or Mexico. The California Indians living in the interior commonly burned the leaf litter under oaks to facilitate the collection and storage of acorns (roasted nuts and no weevils). These people must have starved when wild oats were introduced. The first time they burned under an oak with grass present must have been REAL exciting.

Some accounts of this plant community by early travelers:

"The country about Visalia, for six or eight miles in every direction, looks like an old park, because of its magnificent oaks. These trees, like the oak generally in California, are low-branched, wide-spreading, gnarled; they are magnificent in size; many of them must be hundreds of years old; and they are disposed on the plain in most lovely groups, masses, and single specimens. You drive for miles among them; and you meet, very frequently, single trees so large, so stately and perfect, that a painter of trees would be enchanted with them. The mistletoe, which is the enemy of the oak in California, does not seem to trouble these trees about Visalia; I do not remember seeing any of this parasite, except on some oaks and cotton-woods near Tulare Lake." Charles Nordhoff, 1873.

"All the road and all these plains are full of very large, tall oaks having good and large acorns. Likewise there are many sycamores, and pines bearing good pinenuts with hard shells, and so leafy that their branches begin near the ground, and, tapering toward the top, end almost in a conical point. High up in the sierras are seen large numbers of spruce and other trees. Along here there are some birds which they call carpenters, which make round holes in the trunks of the oaks. In each hole they insert an acorn so neatly that it can be taken out only with difficulty, and in this way they make their harvest and store, some of the oaks being all dotted with the acorns in their trunks." Font 1776 somewhere between Santa Margarita and Salinas

"We continued to travel all day over a rough and hilly country, where we occasionally found springs, but rarely grass, the character of the soil differing but little from what we had noticed in other parts of the northern portion of Upper California." James L. Tyson, M.D 1850

Under the term oak woodland are three variations that we have observed: Oak Woodlands, where the oaks and pines were fairly close together mixed in with tall and short shrubs,and openings of wildflowers, forbs and few grasses; Oak Savanna, where the trees were a good distance apart, mostly few to no shrubs, and between was mostly forbs with little grass. (the woods were thickets in some places), and Oak Forest where the oaks and pines were touching and there were several layers of understory, from tall shrubs to short shrubs to perennial and annual forbs, with a very small amount of grass.

A list of California native plants that grow in the Central Oak Woodland plant community. 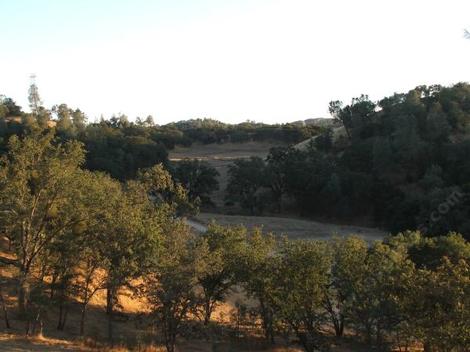 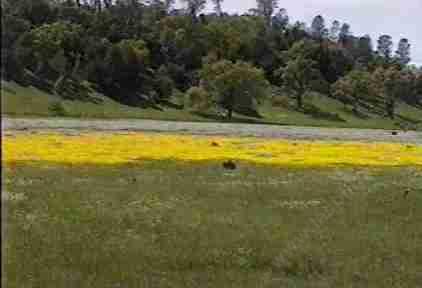 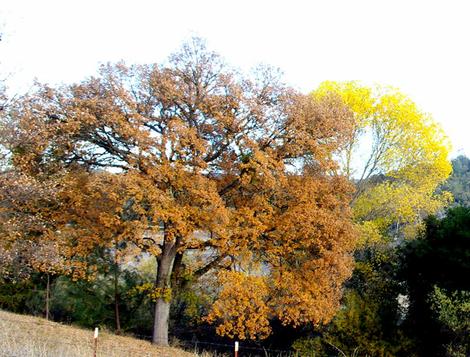 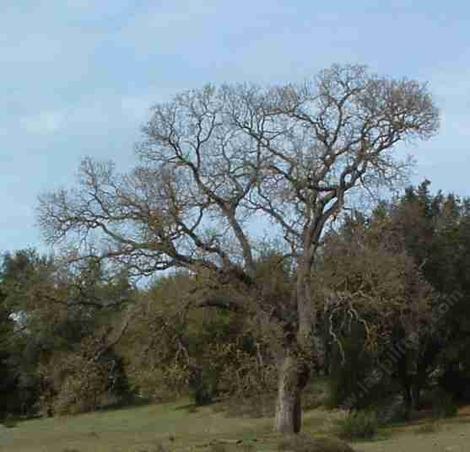