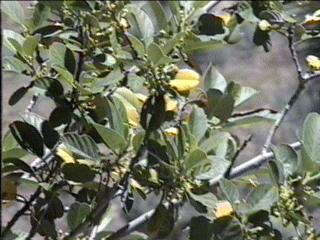 This Coffeeberry is an evergreen bush that grows at a slightly higher elevation than common coffeeberry. In the Southern California this coffeeberry is commonly around mountain cabins or some of the newer mountain developments. Nice bush that is good in the garden and for the birds. Used by Orioles to Thrashers. In one location associated commonly with Artemisia tridentata, Rabbit Brush, Quercus chrysolepis, Q. agrifolia, Q. Wislizenii, Q. kelloggi, Q. dumosa. In another location associated with Pinus Coulteri, Pinus ponderosa, Pinus Jeffreyi, Libocedrus, Ceanothus cuneatus, Quercus dumosa, Arctostaphylos glauca, and Arctostaphylos hookeri. Grows on most soils. Is mostly limited by summer heat(doesn't like it) and rainfall(likes about 35 inches or more). As it sometimes is found at lower elevations in cool north slopes next to streams, coastal gardeners can probably use it with no problems if they want a different look. (Ok, the name Rhamnus californica is being played with as Frangula californica.)