Here are some of the native buckwheats, there are a number of other perennial buckwheats and a whole lot of annual buckwheats not included. Native Buckwheats work in a native garden as babies breath does in a floral arrangement. They are some of the most popular nectar sources for butterflies and great nectaries for many of the insect predators.  Blue and hairstreak butterflies  especially like buckwheats and many of these species suffer from dwindling habitat. Buckwheat flowers seem to last forever, turning a chocolate color in the fall. They are very drought tolerant and can tolerate many arid environments as well as coastal salt spray. (some coastal species).
We commonly plant buckwheats with sages and Woolly Blue Curls. Also they work great with boulders, are stunning next to brickwork. They often create the look that people think they want when they plant grasses. Grasses generally look bad for most of the year. Buckwheats look good for most of the year and have a similar texture or wild look that grasses are planted for. 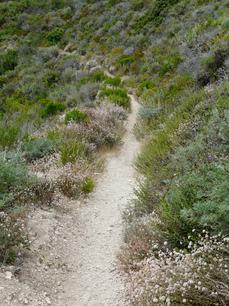 Eriogonum arborescens, Santa Cruz Island Buckwheat has little pink flower cluster that turn chocolate in winter. It forms a tidy bush with erect foliage and sprawling branches. It can tolerate seaside conditions as well as the hot and dry climate of the interior. Santa Cruz island buckwheat is very drought tolerant. This plant is very popular with hairstreak and blue butterflies. 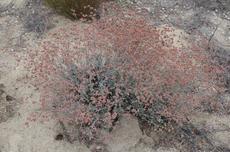 Eriogonum covilleanum, Coville's buckwheat is an annual buckwheat we collected on one of our Biological surveys in Paso Robles. 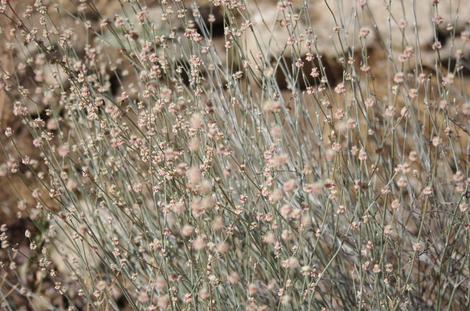 Eriogonum elongatum, Longstem Buckwheat has long slender gray flower stalks with small delicate pink flowers. It is very drought tolerant. In mass they are like a shimmering sea of life. Eriogonum fasciculatum foliolosum, California Buckwheat is very drought tolerant. The buds are pinkish and turn white when they open. They cluster in tight little balls on long stalks and turn a chocolate brown in the fall. It has green foliage.
Coppers blues and hair streak butterflies use it for nectar.

Eriogonum fasciculatum foliolosum, California Buckwheat grows in the chaparral in very dry hot conditions where many little animals and birds use it for cover. Eriogonum fasciculatum polifolium, Interior California Buckwheat is similar to regular California buckwheat but it is more drought tolerant and has grayer foliage. In the photo here it is mixed with Salvia pachyphylla and other desert species and is quite happy.

Eriogonum giganteum, St. Catherine's Lace is California's largest buckwheat, in flower at least. It has huge flower clusters often more than a foot wide. It has large gray foliage and grows about three foot tall and three foot high. Although it is at home in coastal conditions it also does fine in California's hot dry interior valleys. It is very drought tolerant. 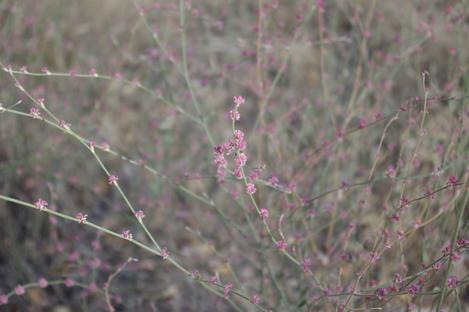 Eriogonum grande rubescens, Red Buckwheat is found on the islands. It can tolerate coastal conditions. However, it also does well in the interior of California only needing part shade to survive the hot dry summers. It has nice round leaves and very pink flowers. It looks great in a rock wall. It is smaller and more delicate than many of the other buckwheat, only growing about a foot tall. Eriogonum heermannii, Heermanns Buckwheat is a 2-3 ft. buckwheat that lives on serpentine based soils. Eriogonum inflatum, Desert Trumpet is a rather weird plant from the desert. The part that you'll notice is the stem, not the flower or leaves. 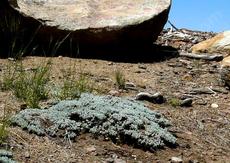 Eriogonum kennedyi, Kennedy's buckwheat is a flat little perennial that has delicate pick flowers. You'll find it high up in the mountains like on top of Mt. Pinos. Eriogonum latifolium, Coast Buckwheat This coastal buckwheat has tall open flower stalks and gray basal leaves. It is similar to Eriogonum grande rubescens but opener and grayer with white flowers. Eriogonium nudum var. pubiflorum, Naked Buckwheat can grow very  large from a little plant base. Naked Buckwheat can't compete with weeds, so you'll find it outside of the fence line along road cuts throughout much of California. 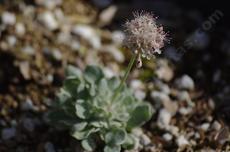 Eriogonum ovalifolium, Cushion Buckwheat is mostly here to show the diversity of buckwheats. It grows about 2 cm(inch) across and 1-2 cm high, and it's a perennial. 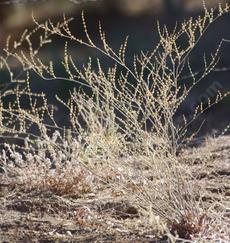 Eriogonum roseum, Wand buckwheat is an annual buckwheat that is native all over the Santa margarita property. 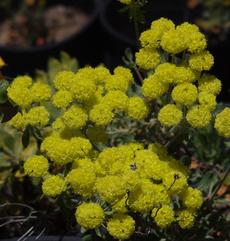 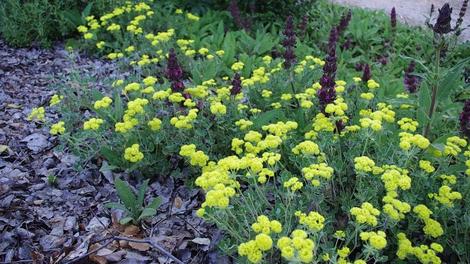 Eriogonum umbellatum, Sulfur Flower is very low growing, only a few inches tall, and very yellow. It grows at high elevations, over 4000 ft, and likes good drainage. It does well in the Santa Margarita nursery garden in decomposed granite and 110 deg. summers. 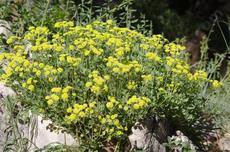 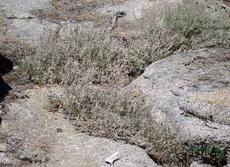 Eriogonum wrightii subscaposum, Wright's Buckwheat is a tufted little mound of gray that has a fireworks of pinkish white flowers in summer. 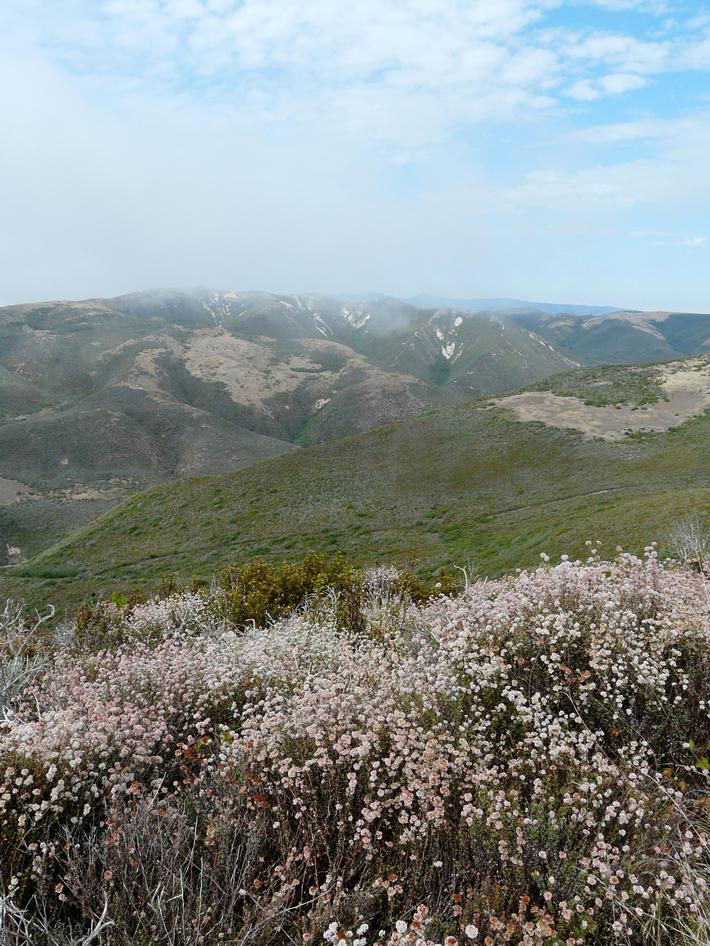 Mother nature is wonderful. Why people do not want to copy it is beyond me. Cliff buckwheat above Los Osos. 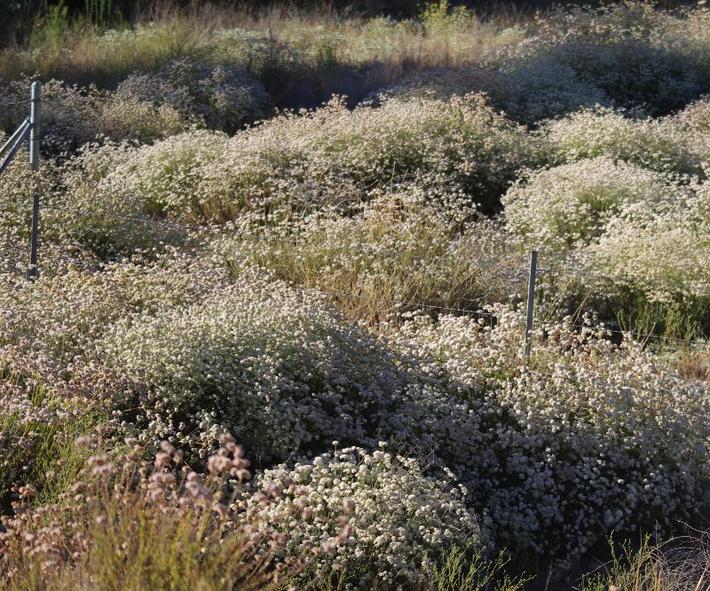 Vast areas of California used to have Buckwheat covering the ground.