We've had many an argument on where/how to define this community. It generally runs along the coast from about San Luis Obispo north, but we have seen fragments farther south. The problem is in the high wind areas with high sodium, high chlorine, shallow soils or other problems. The species composition does not fit very well any of Munz's plant communities, but some species are found in all of the coastal plant communities. We believe that alien, annual and perennial grasses, with the help of grazing pressures, have effectively crowded out much of the grass component of the coastal prairie in many of the more southern sites where we have studied and worked. Which do you put it into?

Tons of butterflies from Monarchs to Skippers, native flies and wasps

An area along the coast where seasonal seeps hydrate the soil to saturation in winter and gradually dry out in summer. These areas are commonly impacted by wind and/or salt spray. Some of the wet sections of Serpentine Grassland closely fit this Coastal Prairie. Very few of the California Coastal Prairie plants make it in the Valley Grassland. The pH, rainfall, and soils are just too different. One characteristic that we have observed, that seems to separate the Coastal Prairie from the serpentine grassland is that, in winter, the Coastal Prairie is much wetter, (soaking wet, in fact, and oozing water) than the serpentine grassland. The picture below was taken on a coastal bluff in northern San Luis Obispo county.

There are a few small patches south of Cambria (Vandenberg, and a few places around San Luis Obispo come to mind) that fit the Coastal Prairie description, but most are from Cambria north becoming the most noticeable in the areas about Richmond.

The Coastal Prairie is hard to delineate from Coastal Strand in some spots; in others, it merges into Coastal Sage Scrub, or in Cambria, Closed Cone Pine Forest. What to do with coastal bluffs? Sometimes the community of plants seem to fit into Coastal Prairie or Coastal Strand or Coastal Sage Scrub. Yikes! The little subshrubs that we see as Coastal Prairie in northern San Luis Obispo County, (Cliff Buckwheat, Eriogonum parvifolium, Coastal Golden Yarrow, Eriophyllum staechadifolium, Golden Bush, Hazardia squarrosa,) because they are mixed in with more typical Coastal Prairie plants such as Douglas Iris, Iris douglasiana, and Blue-Eyed Grass, Sisyrinchium bellum, may be the transition, into the more northern and typical Coastal Prairie, with grasses, sedges, and monocotyledenous herbs like Wild Hyacinth, Dichelostemma capitatum, Mariposa Lily, Calochortus spp., predominating. The reason we determined that this small patch of a plant community is not Coastal Strand is, again, that the soils, unlike coastal strand soils, become supersaturated in the winter, and that this patch is not Coastal Sage Scrub is because the other coastal sage scrub plants could not grow there.

If you happen to live in a Coastal Prairie site and want to start a garden:

Coastal Prairie plants do not benefit from mulch, in that, mulch is not normally seen in this plant community. Also, aggressive weed control for one year and one half at least, seems to be needed until the plants that you set out have grown and filled in the bare areas. Coastal Prairie plants can be set out one foot apart. The biggest problem with creating a Coastal Prairie is, the constant invasion of WEEDS. After the plants have become established, you will still probably have to undertake periodic weed control forever.

Sometimes you can find some funny plants like Carmel Lilac, Ceanothus griseus, which is more representative of the Chaparral plant community, that are one foot tall, mixed with more typical Coastal Prairie plants such as Blue-Eyed Grass, Sisyrinchium bellum, Douglas Iris, Iris douglasiana, and California Oat Grass, Danthonia californica.

A list of California native plants that grow in the Coastal Prairie plant community. 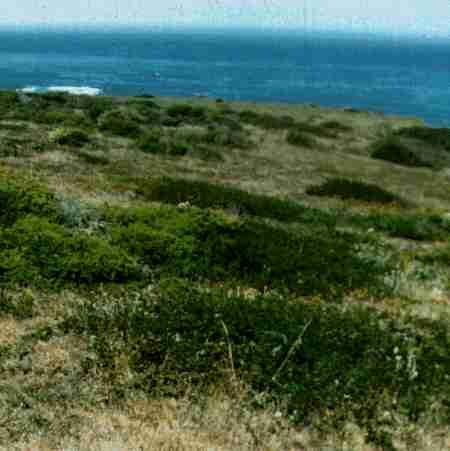 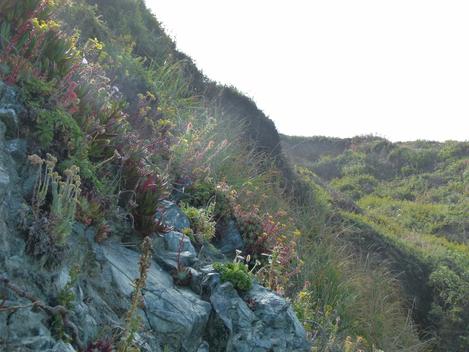 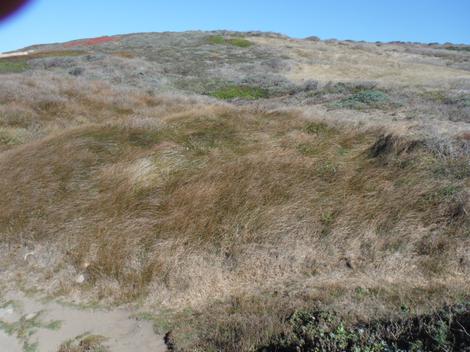