The Red Fir Forest is clean and open. In the sunny openings where the soil is thin, some would say, not there, Pinemat Manzanita (Arctostaphylos nevadensis) and Mahala Mat (Ceanothus prostratus) live with large areas of Mountain Pride (Penstemon newberryi). Slightly deeper soils can have Bush Chinquapin (Chrysolepis sempervirens) or Greenleaf Manzanita (Arctostaphylos patula).
Green leaf manzanitas are in the forefront with firs in the background. This is what a clear cut looks like as it tries to recover.

The soil never gets hot up where this forest is. The air has that 'mountain zing' most of the time. Frost free days may exist in July and August, sometimes in a warm year, September. Snow can be very deep here and the forest can form 100 foot tall thickets. Because the soils are so acidic, perfect draining, the snowfall commonly 10 feet or more(up to 60), and summers cool, plants from this community are a problem in much of the rest of California. Back east these plants can be winners, but this is a hard plant community for teachers to build for a school garden in Bakersfield, Los Angeles or San Diego. The best we can hope for in a lowland garden is something like this picture in a town like Cambria, Monterey or Santa Cruz.

Granitic soils are usually acidic and fast draining. Think fir and pine trees with shed- sized boulders between them. You commonly walk through rock outcroppings or almost beach gravel between groves.

Makes you want to ride a horse amongst the fir trees and look for gold or silver doesn't it? Maybe build a log cabin and have a television show called 'Big Trees and Rocks'.

The only problem with this picture is that it was taken in summer, the 2-3 months that represent the spring, summer, and fall of this plant community. Come September things get a little iffy. Frost is common by the first of October, 3-8 foot of snow can happen anytime in October or early November. The snow stays in this community until May or so. Peattie called this forest the “snow“ forest because of the extra moisture derived from the slow snow melt. Plants that live in and under this snow have adapted by hibernating in winter and our spring. This plant community's spring is in July and August. The temperature under the snow is commonly just above freezing, 1 C or 33 F. (Gophers eat all they can find.) The shrubs and perennials from here do great in areas of cool weather. They do not handle hard winter frosts, nor hot spring soils, or hot summer temperatures.

A list of California native plants that grow in the Red Fir Forest plant community. 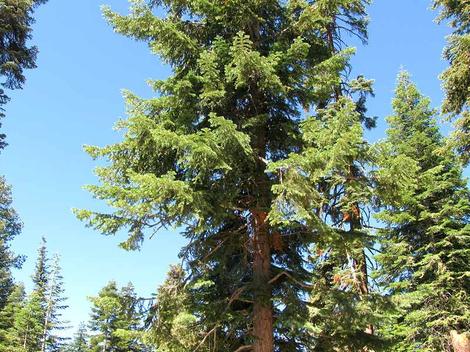 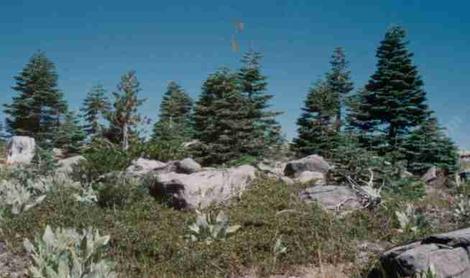 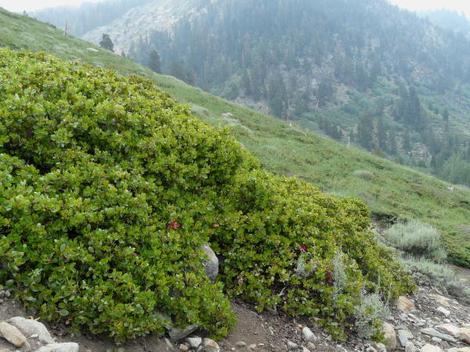 A short video of a Red fir forest with Abies magnifica, the Red Fir or Silvertip fir, and Abies concolor, White Fir.
Other places you might find us roaming about: