Varies, as it's driven by rivers or creeks.

sand to clay, generally no drainage at all, the soil is commonly sour

What is a fresh water marsh?

We define Freshwater Marsh as a marshy area that you can sometimes wade through and is not covered with winter snow. (Rivers, lakes and ponds overlap with this but are a whole lot less muddy. Freshwater Marshes might be called mud holes with plants in them.) Mud everywhere, sometimes deep enough to consume a horse, cow, Yugo, or mother-in-law. In a yard the Freshwater Marsh would be the area under the dripping faucet, or where the neighbor's lawn water runs down into your yard killing all your drought tolerant natives. Plant the Freshwater Marsh plant community species there, preferably tall ones to hide your hydrophilic neighbors ugly non-native landscape.

The California fresh water marshes have been filled, replaced by weeds, drained and grazed to almost oblivion. A pictures proved to be difficult to find. Where there are cattle the native plants are still alive, but heavily eaten. Where there are no cattle the weeds have replaced the natives. The rushes, sedges and spike rushes live in  seasonal ponds and have enough moisture long enough to support their life cycle (about four months). If the seasonal pond dries out in one month it would be called a vernal pool. If the water was deep enough and stayed there all year, it would move to a riparian area with willows, cottonwoods and tules (on the edge).

Look for the target plants: rushes, sedges, tules, and spike rushes. The marsh areas will stay green until maybe July or August. They may have shallow, standing water all year. Marshes have near anaerobic conditions (stinky, sour soil with no oxygen for plant roots to breathe), riparian areas have some water movement (with oxygen in the soil and/or water), (ponds and lakes have vertical circulation). Because the aeration is so bad in marshy soils marsh plants have adapted themselves to acquire oxygen via air pumps; pumping air from their leaves down into their roots and the area around their roots. Ironically, as the marsh plants aerate the mud, willows and other riparian plants can grow, but as the willows grow into trees they shade out the rushes or sedges that are pumping the air into the mud or mire, and the mire becomes airless, (deflates) killing the willow, and reverting back to marsh.

Now, weeds do not care. They're weeds. All weeds care about is producing seeds. They do not even care about their own next generation. Weeds are generally limited by herbivores, drought and cold. Marshes do not have much of these limiting factors. So the weeds rush to seed and then die, leaving a mass of dead tissue and stems covering all. This ends up burning, making bare patches in the marsh that spreads more weeds. After a few years (sometimes decades) there are no marsh plants left, just weeds. Now fire favors weeds, and tilling favors weeds, so you're left with spraying herbicides or grazing. Neither is very pleasant. Herbicides are very bad near water and are especially bad for any amphibians which happen to love these areas. Cattle are going to go tromping around looking for the greenest tastiest stuff and are going to make a nasty mud hole.( It is always a bad idea to work muddy soil.) Both can work if done when the ground is dry, but it is SO much better not to screw it up in the first place.

California has lost much of the Freshwater Marsh plant community. The largest area was in the Sacramento and San Joaquin Valleys.

Here is an account of California's central valley from an early Spanish explorer. "We again looked toward the north, and between the low range to the northwest and the Sierra Nevada we saw an immense plain [Footnote 380] which on that side apparently ran in the same direction as the Sierra Nevada; but on the other side it opened about to the west, with such a sweep that it embraced almost the entire semicircle of the horizon. This is the plain through which the sea of fresh water extends, not continuously but in places leaving great areas uncovered or with little water, forming those great green tulares that begin near the mission of San Luis. According to their direction and to this account they must be more than a hundred leagues long to this place, not counting the distance which they may extend above, for we were unable to see their terminus, and in width they must be some twenty-five or thirty leagues. I surmised that these tulares must run to the vicinity of the port of Bodega, and that the green field which Captain Don Juan de la Quadra saw to the east of his port must have been tulares like these which we saw here, or that they might even have been the same ones, extending as far as that place." Font, 1776 [a league is 3 miles]

A list of California native plants that grow in the Fresh Water Marsh plant community. 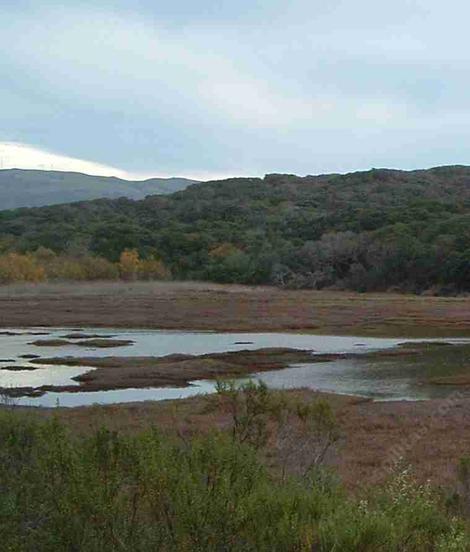 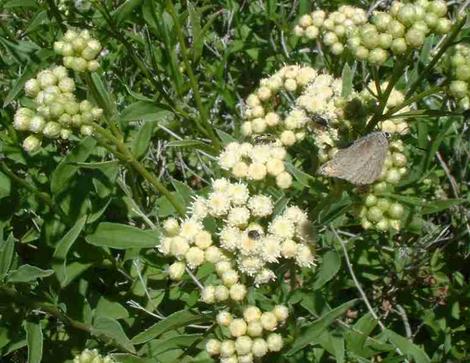 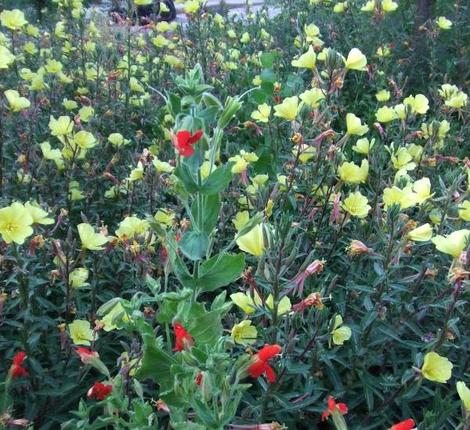 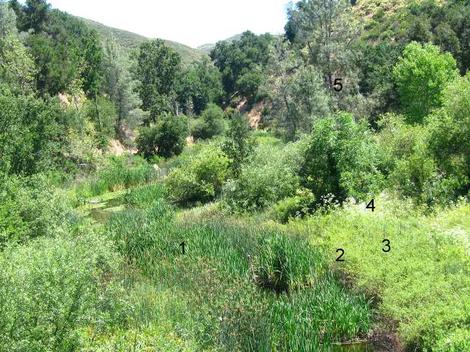