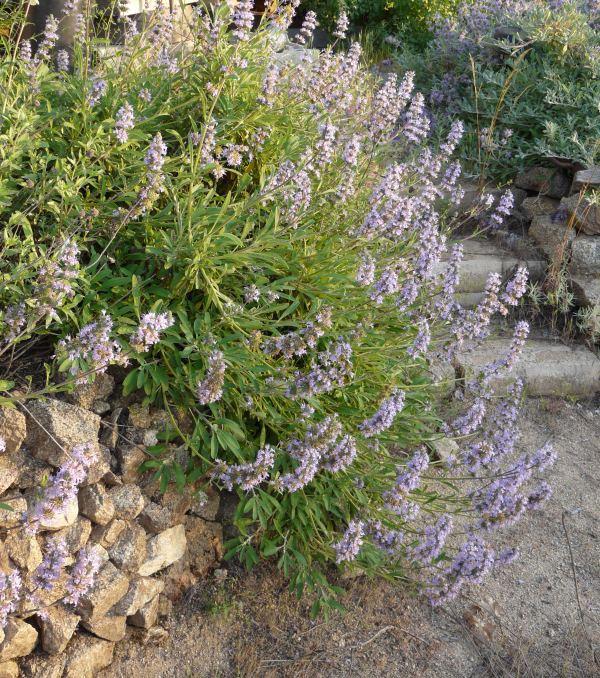 Salvia 'Mrs. Beard' appears to be a stable hybrid of Creeping Sage, Salvia sonomensis and Black Sage, Salvia mellifera that's  low growing with a nice blue flower. A low growing, dark green sage that grows to three or four feet across and a foot tall. Useful as the low transition between Arctostaphylos or Ceanothus shrubs and a walkway. Use with Desert mallows to make a WOW in front of Fremontias or larger Arctostaphylos and Ceanothus. We've used it on slopes and a landing zone for hummingbirds. If you have a slope above a patio this would be effective as a bird plant.

'Mrs. Beard' Sage tolerates part shade inland  but prefers full sun and needs full sun near the coast. This sage really needs to breath, do not plant it in closed spaces, particularly  near the coast as it may get mildew. It is very drought tolerant, but tolerates regular watering. Cold tolerant to at least the low teens if not the single digits. I doubt it will grow in Portland or Seattle, but it might, it's about as hardy as Salvia sonomensis.

Betsy Clebsch in her book "The new book of Salvias: sages for every garden" lists the origin as a hybrid in UC Berkeley's Botanic Garden discovered by Helen Beard in 1965. I think it's interesting that it was called Mrs. Beard instead of Helen Beard. A sign of the times?