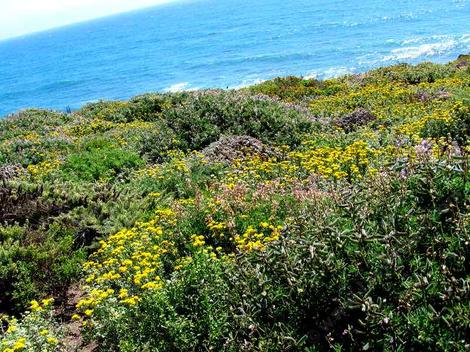 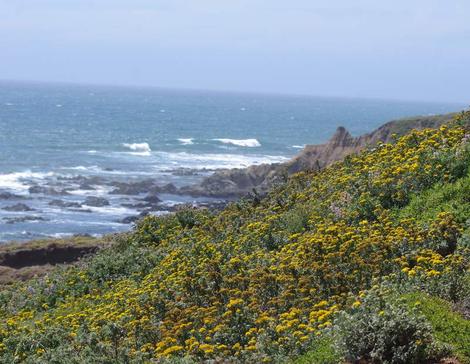 Coastal Prairie Mitigation- central coast of California, U.S.A.; Rainfall, @ 15inches/year; Climate; Mediterranean; Plant Community, Coastal Prairie; Site Characteristics: Top of cliffs interfacing with the Pacific Ocean and eastward @ 100 feet, disturbed (overgrazed rangeland), the dominant vegetation being the alien species Silybum marianum, Erodium cicutarium, Brassica nigra, Avena fatua,and Hordeum murinum ssp. leporinum; fairly level, west-facing marine terrace, Geology: poorly drained, clay soil, pH 8.0, from Upper Cretaceous Marine sedimentary rocks with outcrops of soil based upon Mesozoic ultrabasic intrusive rocks of serpentine and related rocks; The coastal prairie plant community only extends from the cliff to, on average, one hundred feet inland on this particular site. Propagules and seeds were collected from the site (and adjacent areas), grown by contract, and replanted back onto the site within specific ecological parameters. The problem on this particular mitigation site: sodium in excess in the soil (1000 p.p.m.) and the well water (500+ p.p.m.), and truck water was prohibitively expensive. Consequently, the site could not be irrigated by conventional methods and no irrigation water was applied to this site. The site was planted in October, no rain occurred until two months later, in December, and the planting results were: 98% live plants (Count taken after one year). Species included (but not limited to):

Initially the site was a cow pasture with a room with a view. After two years we had partial fill-in. After 5 years we had canopy.

We were on both the consultant list and provider list for the Coastal Commission of years. I'm not sure if we're still there as we do not do this anymore. Life is too short.

This was done originally in the early 1980's., so the before images are marginal.