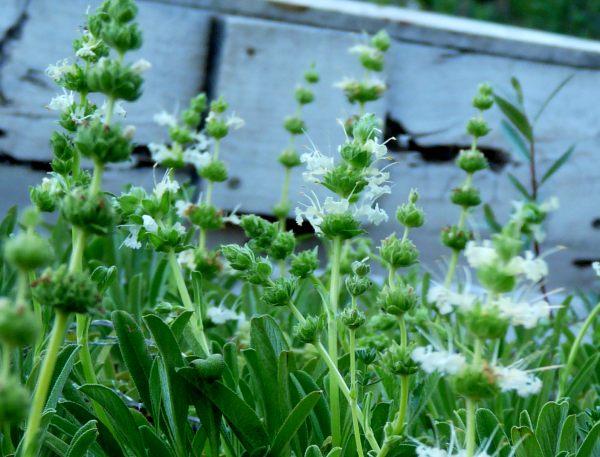 Salvia sonomensis Farmar-Bower is a golden creeping sage that is a garden-tolerant perennial creamy yellow flowers. Apparently, this yellow flowered form is more common in the northern portions of the state.

This Salvia sonomensis selection, 'Farmar-Bower,' is very clay tolerant, and does best in afternoon shade/semi-shade here on the central coast ranges of California. In southern California it may need some supplemental water during November through April. Unusual flower color for a California sage. Grows well, and makes a natural groundcover, and excellent companion plant under manzanitas such as Arctostaphylos 'Austin Griffiths' and Arctostaphylos manzanita x 'Dr. Hurd', and certain other shrub/tree manzanitas, for those people that cannot be satisfied with just mulch, but need plants covering the ground of their garden space, or do not like the "messy" look of gorilla hair mulch, chipped plant material mulch, or oak leaf mulch. This Salvia sonomensis selection blends beautifully with the blue-flowered sages, such as Salvia sonomensis, Salvia sonomensis 'Mrs. Beard', when they are grown together.

This creeping sage has yellow flowers. Betsy Clebsch reports it was introduced by Cal Flora nursery in Fulton and was named after the former manager of Skylark Nursery and one of the most clay tolerant of the sages. Cal Flora has this listed www.calfloranursery.com/plinfo.html and contribute it to Kent Calkin of Creative Landscape Consultants.

An Email from one of the many correctors "Just thought I would point out that Salvia sonomensis 'John Farmar-Bowers'was listed as S.s. 'Farmar Bower' with no John and no s, in your web site. Also he was the owner of Skylark Nursery, not the manager. Minor points but they might as well be right. It was named to honor him and the errors do not do that." We had this on the website.