Crummy climate, sometimes awful soil. Soil varies from acidic sands(granitic where water flows) to highly alkaline clays. Many of the areas have a pH of 9 on the surface,(highly alkaline) to 1000-10000 times more acidic 3 ft. down.(see Pull a soil analysis from different soil depths and any soil differences to see if it's good, bad or ugly. Climate can be worked with, but you have to pay attention.

The area below Pinyon-Juniper Woodland and above Joshua Tree Woodland is where the Sagebrush Scrub plant community usually exists.

This strip of a plant community, in some places like Lake Of the Woods, Quail valley or Lake Hughes may only be a valley a few hundred meters wide. In other areas like Owens Valley it may be 10 Kilometers wide. In southern California it is disjunct and spotty, existing in between the Yellow Pine Forests in areas like Mountain Springs. The Sagebrush Scrub plant community looks and feels like a low, cold, soft, gray chaparral plant community. A number of very cool perennials live in this plant community that happily live at lower elevations.

The creeks running down from the Sierra Nevada mountains support a wider range of species because the Sierran rainfall is acidic, while the natural soils of the area are slightly alkaline. In those areas you can find Golden Currant (Ribes aureum), Antelope Bush (Purshia tridentata var. glandulosa, Purshia mexicana var. stanburyana) and a number of other species hiding out.

A list of California native plants that grow in the Sagebrush Scrub plant community. 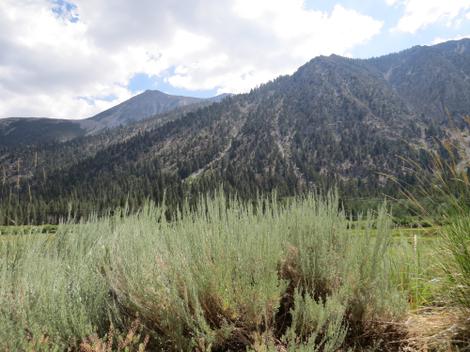