Here are some ideas for growing a native garden, or any garden, in the San Joaquin valley. 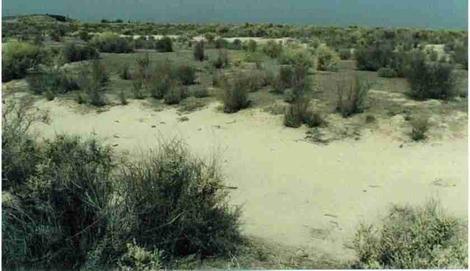 An old photo of an alkali sink along I-5 by Bakersfield.

These are highly alkaline soils that range from 5000-10000 ppm Sodium and/ or Calcium, pH's range from 8 to 10. They used to convert these soils into agriculture by pumping a truck load of sulphuric acid on each field, which did not work for long. Then they tried flooding the fields and leaching the salts off. This led to the bird deaths at Kesterson Wildlife Refuge (Selenium also leached out of the fields). If you live in the lower areas of the San Joaquin Valley the yellow leaves that are common in new subdivisions are due to this salt/alkalinity problem. Plants from the dominant 1 plant communities can tolerate this soil . 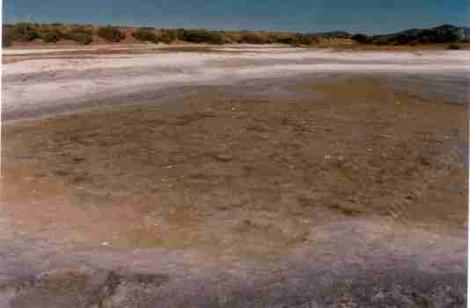 An Alkali sink after a heavy rain.

About the Alkali Sink

This plant community is being destroyed throughout its range. Between new home construction, expansion of agriculture and the spread of alien grasses, thousands of acres per year are being replaced by people and weeds. This is a desert type plant community that has never seen fire. Once the annual grasses move in, fire is only a matter of a few years away. After a few fires, the plant composition of the area is changed so that the alien annual grasses are the dominant plant species and replace the native plant community. Some people label the destroyed plant community 'annual grassland'. Weedy mess is closer to what's left after it has been overrun and burned.

This community is open to invasion because of several contributing factors, not the least of which is that fire is a great disturbance, and disturbance changes drastically the plant makeup of plant communities. Disturbance, remember, encourages weeds, or pioneer species, or ruderals, whatever you want to call them. Fire releases much nutrition (the burned-up plant material) onto the soil and the weeds use this nutrition to more quickly grow and reproduce and so replace the slower growing native species. Before, the fire, how did the grasses get into the plant community in the first place? Grazing animals is one answer. The plants in the desert are interconnected underground. When the grazing animals are introduced en masse, they tear the soil with their hooves, break up the underground system of roots and fungus-roots and at the same time introduce the weedy, alien grass seeds in their fur and feces, etc. Nutrients are released from the broken-up fungus-roots and the weed seeds use this nutrition to grow quickly and reproduce. The weeds are now off and running, in little patches here and there. Over time, as more disturbance occurs, through grazing, home construction, etc. more patches of grasses occur. Then there is something to burn, and burn it does. This gives the weeds a gigantic advantage over the native plants. Another factor that may favor the growth of the weeds is nitrogen, in the form of nitrous oxide (from car exhaust) from air pollution which is carried into the soil as rainfall and is available to plants as a fertilizer, nitrate, which raises the normal level of nutrients and favors the weedy grasses over the native plants. The slow overrun of the community by alien plants is called a press, the pressures on the native plant community through burning and grading are called pulses. Both overrun and collapse the plant and animal community. In this plant community this invasion commonly leads to nearly bare ground, with a one inch covering of weeds and lowered animal diversity.

Ok, off the soap box.

The areas range from bad to real bad and the community barely is a community. The soil pH can range from 8.4 to 10, rainfall can be as low a 2 inches(3 cm.), and the rain can come in two down pours leaving standing water for a week or so. The plants are fog adapted and fog can account for up to 10 inches(25 cm) of precipitation each year. Once the plants are killed by fire, they have a great deal of problems coming back because the fog drip is no longer there. (The fog drip is from the larger bushes, that provide moisture and shelter for the baby plants.) Much of the San Joaquin Valley was covered with this plant community. The fogs there can be continuous for 2 months in early spring, blanketing everything with moisture, while the ground is bone dry, except under a bush.

If you're planting these plants in other areas of the state they do not like acidicity or much winter water. If the ground stays wet for more than a few days, the desert plants will rot. In some spots it is a little hard to tell Alkali sink from Shadscale. Here a Honey Mesquite straddles both plant communities.

If you are attempting to restore an area that was Alkali sink it is really pretty easy, exclude all weeds, plant community specific plants, preferably plants from the specific area (contract grow), plant in January and water well about three times in one week intervals.

A list of California native plants that grow in the Alkali Sink plant community.