How to attract the Phainopepla to your garden

The Phainopepla can be attracted to your garden by planting their favorite berry plants. To attract mistletoe you can plant many trees including blue and coast live oaks, junipers, and cottonwoods as well as many desert species such as Mesquite and Acacia. Mistletoe is an epiphyte that uses the tree as a substrate like a normal plant would use soil. It is hemiparasitic attaching itself to the xylem of its host, but photosynthesizing making its own food. Because they are not able to absorb their nutrients and minerals from the soil, they have to use whatever is absorbed by their host. This limits their size, as they can easily become nutrient deficient. They do not have true roots and are unable to be selective in what they absorb. It is common for people to think of mistletoe as a pest or as harmful to the tree however most studies have found this to be unsubstantiated. In fact many studies have found the mistletoe to be very important to plants as well as animals. Mistletoe may act as a dumping ground for excess minerals that their host plant cannot absorb. There are four species of the genus Phoradendron and three of the Arceuthobium genus. The Arceuthobium genus is found on conifers that is Pines, Firs, Spruce, Hemlock. Phoradendron is found on a wider variety of trees and shrubs including Juniper, Mesquite, Acacia, and Oaks.

They also like to eat Elderberry, Poison oak, Juniper, and Grape Berries. The Phainopepla is a sleek black bird with a long tail and a tall crest. They have red eyes which stand out in a black face. The male and female Phainopepla have white under their wings. The female is a duller gray in color. The Phainopepla likes to perch on the tops of trees and bushes in a similar fashion to Tyrant flycatchers like the Ash-throated flycatcher.

Nesting habitat of the Phainopepla

The Phainopepla nests in dense foliage in tall shrubs or trees. They like to be close to their berry sources.

The Diet of the Phainopepla

Although the Phainopepla is called a flycatcher, it eats mainly berries. Some of its favorites are Mistletoe, Elderberry, Poison oak, Juniper, and Grape. They also like to eat insects usually by hawking, flying off one perch catching insects and then returning to the same perch.

The Phainopepla can be found in many habitats where there are berries abundant.

Desert wash (where mistletoe is present)

Range of the Phainopepla in California

The Phainopepla is found mostly in southern California. However they are also found along the foothills of the Sierra Nevada range and in chaparral and oak woodland on the western side of the San Joaquin valley.

Migration of the Phainopepla 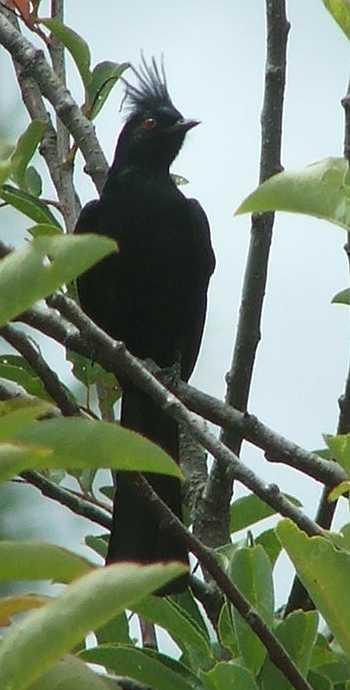 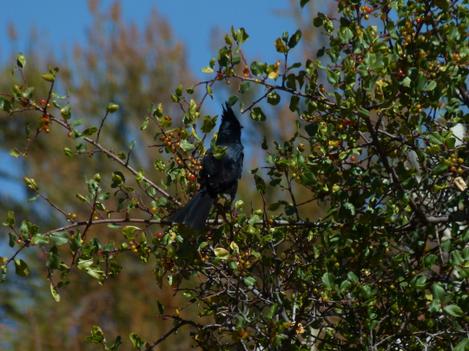 The Phainopepla does not migrate, as a rule, but they do move around in search of better sources of berries. They leave the desert in the hottest parts of the summer moving north and along the southern coast. 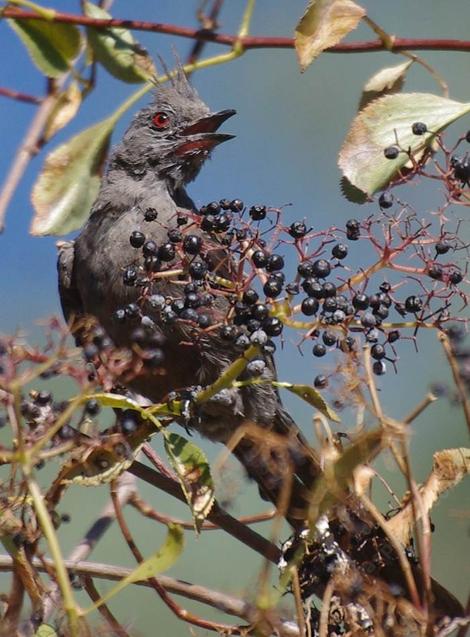 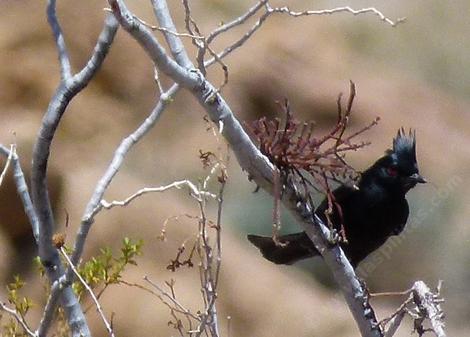 A Phainopepla checking out mistletoe on the Creosote in the desert. 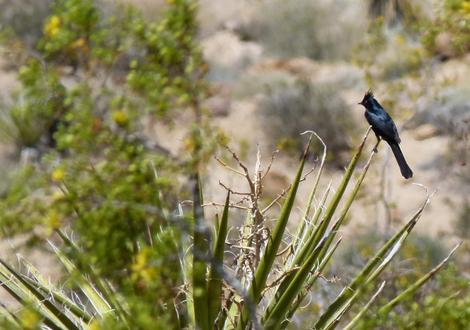 In the desert
Other places you might find us roaming about: