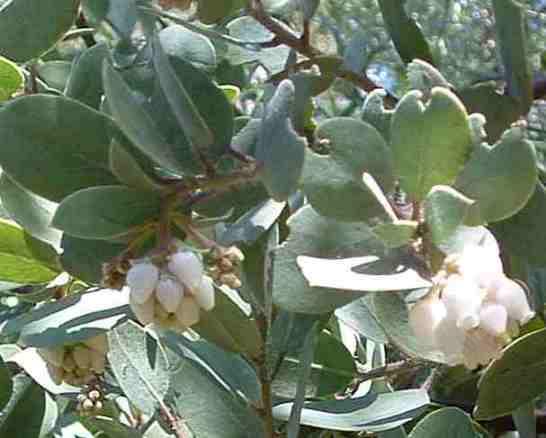 Evergreen bush manzanita, usually about 4' tall. It has 1 1/2" gray leaves, red- brown stems. Among the toughest of the manzanita, roots and spreads to 10' wide, usually on sandstone or clay. This would be one of the ones to try not watering in a heavily mulched garden. In southern California it is native up into the granite peaks associated with Adenostoma, Ceanothus greggii, Quercus dumosa, Cercocarpus betuloides, Cupressus forbesii and Yucca whipplei (Keeler-Wolf). In our area we have seen it on a south -facing slope mixed with Adenostoma, Ceanothus cuneatus, Quercus agrifolia, Salvia spathacea and Salvia mellifera. This species is diverse in forms and ecology. It grows primarily in the chaparral habitats discussed but it will also grow into the Yellow Pine Forest, northern California Pine Barrens and Coulter Pine Forest (Barbour & Major). Wells has had fun splitting this species and subspecies and forms. DIFFICULT, expect to get one or two plants established out of every 5 planted. The one or two may live for 100-200 years though so be patient. This plant is now considered Arctostaphylos crustacea ssp. crustacea (Jepson).